The end of another week! Each day feels like a victory. In my household, we have taken to baking cakes for the birthdays of our friends and eating them over zoom. Likewise, we had a celebration with our best family friends, honoring both my older son and the other’s family’s senior in high school for making their college choices. (FTR, in the fall, my kid is heading to Trinity University in San Antonio. We just hope college starts on time.)

On to the news!

????Happy 50th Birthday, Earth Day (which is just a little younger than I am…): Earth Day turned 50 this week, and like people are doing across the globe, the “birthday party” was a virtual commemoration across several different platforms. On our end, we celebrated with you, our community, by writing Earth Day-inspired Haiku. Wow, we were so overwhelmed with the response and the many wonderful haiku submitted. We narrowed the submissions down to our five favorites, but are counting on you to vote for the best one.

Help us identify a winner! 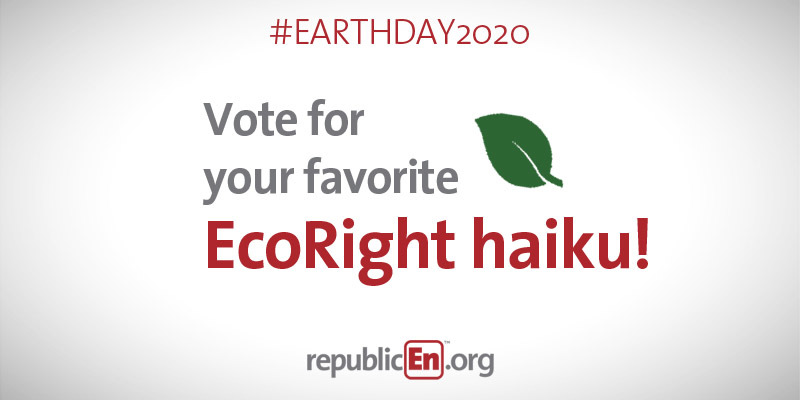 ????This moving seven-minute Outrider video When the Earth Moves explores the history behind Earth Day and features environmentalist Tia Nelson, who also happens to be the daughter of the late Senator Gaylord Nelson, founder of Earth Day. “My father was brilliant at working across the aisle to build consensus,” she notes. “He knew when to compromise. He knew when to stick to his principles.” Appropriately, the segment features by Bob Inglis, reflecting on his EcoRight journey, and Varshini Prakash of the Sunrise Movement. (Looks like Tia inherited more than just her green streak from her father.)

????In the Earth Day essay My Fellow Conservatives Are Out of Touch (The Atlantic) former Pennsylvania Governor Tom Ridge writes: “A wonderful adage says, ‘We do not inherit the earth from our ancestors; we borrow it from our children.’ Earth Day, perhaps this year more than ever, reminds us that the air we breathe and the water we drink should never be taken for granted. And our political leadersfrom both the left and the rightmust take greater ownership on behalf of our children and their children.”

??Spotlight on Spokespeople: I get gazillions of news alerts and newslettersthat’s partly how I uncover the EcoRight news I bring to our community. In this daily combing through articles, nothing makes me happier than seeing our spokespeople’s names in print. It was with great joy that I read Katko should lead Republicans who accept need to address climate change, a piece co-authored by former intern and republicEn superstar Ben Mutolo. “Republican legislators are clearly beginning to move beyond being the party of “no” when it comes to climate change and are actively considering policies that address the climate change issue while remaining true to their political principles,” he and his co-author, Rody Conway, chairman of the Syracuse University College Republicans, write. “According to the Yale Program on Climate Change Communication, approximately 60% of Central New Yorkers are worried about global warming with strong majorities favoring various climate change policies. These findings suggest that for a Central New York politician, acting on the climate change issue would be the right thing to do not only from a policy standpoint but politically, as well.” A big hand for Ben and Rody!

??In a wonderful #latergram, we bring you Bob Inglis and his guest appearance on the Hill Country Institute Live podcast managed by our spokesperson Larry Linenschmidt, who hails from Texas and is spreading the word in the faith community about conservative climate action. They discuss how God has worked in Bob’s life and how his faith impacted both his time in the U.S. Congress, as well as his work now. Listen, there are a lot of portions of this 26-minute segment that I could quote. But let me just say that what surprised me most was a short anecdote Bob shares about his “barn cat” Sam, who makes his debut around the eight-minute mark.

??And last, but not least, from Alaska, Kiera O’Brien weighs in on Earth Day from her family home.

Earlier this week I joined @NPR from my childhood bedroom in Alaska to talk about @YCCDaction, Earth Day online, & my hopes for proactive climate policy. Link to the @NPRWeekend recording here! https://t.co/JQ1mSOBloz
 Kiera O’Brien (@kieraeobrien) April 19, 2020

Let these actions be a source of light during these dark times.

??ACC launches climate contract: The American Conservation Coalition, our young friends in the trenches building conservative climate leadership, launched their American Climate Contract this week. ACC President Benji Backer said of the unveiling: “For decades, climate change has been unnecessarily locked in a standstill due to political divisiveness, poor policy solutions, and inadequate messaging. Finally, the American Climate Contract sets a sorely-needed framework for America to move forward on driving down emissions, keeping our economy thriving, and standing the test of time.” In the development of this pledgewith emphasizes energy innovation, modern infrastructure, resiliency, stewardship, and globalizationACC worked with many leading organizations, including: The Young Republican National Federation, Students For Liberty, The National Wildlife Federation, Trout Unlimited, and Students for Trump.

??Braun earns conservation award: The Nature Conservancy (virtually) awarded Indiana Senator Mike Braun its Conservation Leadership award this week, partly for his work to co-found the bipartisan Senate Climate Solutions Caucus with Delaware Democrat Sen. Chris Coons. “This is quite an honor,” Braun said, “especially when it’s for doing something you like so much. I have had an interest in protecting the environment ever since I was a boy, and I’m anxious to get back to work on the Senate Climate Solutions Caucus.”

We look forward to the return of normalcy too…

With that, have a great weekend. Be well. Stay healthy.