Happy Friday, EcoRight. Last weekend, I survived my high school reunion, where we tested whether we’d retain memories of an event even if exactly zero people posted pictures to social media using the predesignated hashtag. As evidenced by this report, one can still live a vibrant hashtag-free existence. #TeamGenX

This week’s must read: Our spokesperson Jacob Abel got his thought piece A Conservative/Millennial Approach to Climate Change published in the Charlotte Observer. A highlight: “If we are to learn anything from massive government assistance programs it’s that throwing money at an issue does not usually solve it. To address the issues of climate change and energy use are going to take a global effort and one the US has to be a part of. However, solutions for climate change can be brought about through free market solutions and through the innovations of concerned individuals.” Congrats, Jacob! 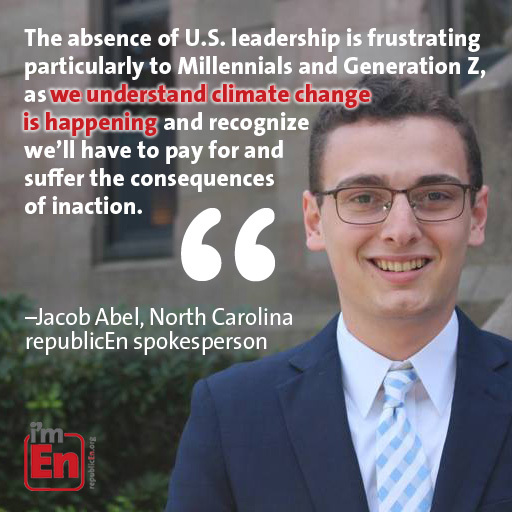 This week’s must listen: Hear Bob Inglis’s take on the Market Choice Act on the Living on Earth segment, GOP Tax on Global Warming Gases. (Bob is questioned during the first 10-12 minutes of the episode.) The main takeaway: “Give a price signal a chance.” (Who wants to make a catchy song out of this one?)

Businesses extend thanks: A group of prominent businesses ranging from BP to Campbell Soup, IKEA to GM sent Rep. Carlos Curbelo and Rep. Brian Fitzpatrick a letter outlining their support for a market-based approach to pricing carbon. While they did not endorse the MARKET CHOICE Act, they thanked Curbelo for leading the dialogue on a carbon tax and seeking a bipartisan solution to climate change. “We believe that an economy-wide, market-based approach to valuing or pricing carbon, when carefully crafted, can both strengthen our economy and reduce carbon emissions by encouraging technological innovation and stimulating new investments in infrastructure, products, and services,” the letter reads. “A market-based approach provides companies, such as ours, with much-needed certainty to aid us in making long-term investment decisions that can further mitigate climate-related risks for our companies, supply chains, and the communities in which we live and work.” The letter goes on to explain that climate change will impact their employees, customers, communities, and their own businesses. “Your recently introduced legislation, the MARKET CHOICE Act (H.R. 6463), represents an opportunity for both parties to engage in substantive dialogue on the risks and opportunities posed by climate change, and to craft legislative solutions that benefit citizens in many different areas of the United States.” (H/T to our spokesperson Tyler Gillette for bringing us this alert while I was perusing college campuses with my 17-year old.)

Keeping the science in science advisor: After a more than 560-day vacancy, President Donald Trump announced his pick for White House science advisor. Meteorologist and former vice-chair of the governing board of the U.S. National Science Foundation, Kelvin Droegemeier was nominated to the post. Noting his “solid conservative credentials” associates said they expect he will advocate for climate science as “he always has.”

“Kelvin is a solid scientist, excellent with people, and with deep experience with large bureaucracies,” said Cliff Mass, an atmospheric scientist at the University of Washington in Seattle. “A moderate voice that won’t politicize the science.”

The official position is director of the White House Office of Science and Technology Policy and the job includes advising the president on technical issues and overseeing coordination of federal science policy. In 2004, former President George W. Bush named Droegemeier to the National Science Board, which oversees NSF, and President Barack Obama reappointed him in 2011. He served as the board’s vice-chair from 2014 to 2017. Droegemeier now has to go through Senate approval.

Permafrost shift: Alaska’s draft climate change plan includes a recommendation the state implement a statewide carbon tax while also supporting a national tax on carbon. The draft plan is being prepared by Gov. Bill Walker’s Climate Action Leadership Team, and in the current iteration, the tax would be used to fund other adaptation, monitoring, and education efforts. According to task force member Luke Hopkins, the tax is one recommendation to fund “the goals that we have.” Oil and gas companies would pay the fee and that cash would be used to help fund energy efficiency projects and studies on the impacts of climate change. “I think it will stick in the plan,” Hopkins said of the likelihood the final recommendation will include a carbon tax. “I don’t think there’s an overwhelming consensus in the group recently that says we don’t want to put anything about carbon pricing. That’s why it’s in the plan right now.” The plan will be submitted to Walker in September. For more, listen here.

Speaking of Alaska: Our spokesperson Kiera O’Brien, who co-founded Students for Carbon Dividends as well as serving as the President of the Harvard Republican Club, was interviewed for this piece on her climate leadership. “I have had so many of my peers come up to me and say, ‘I have cared about this issue for such a long time, and I never had policy I could actually back,'” she says in the interview. As to how she addresses climate hoaxers, “One of us is probably wrong,” she tells them. “If I’m wrong, we’ve improved our economy and our environment. If you’re wrong, we have a big problem.”

On that note, go forth and move the dial. Hashtags optional. (But if you use one, we are fond of #ecoright…)