Finally, the finish line is in sight for the week that would not end. But on the plus side, it feels like the tide on climate denialism is shifting. Read on.

This week’s must read: Our friend Heather Reams from Citizens for Responsible Energy Solutions hit the nail on the head with this piece, Americans won’t buy the New Green Deal, but Republicans need alternatives (Real Clear Politics) “It is pivotal that we take advantage of national unity behind clean energy policy, and not squander this good will with impractical resolutions like the Green New Deal, which is nothing more than a wish list of progressive policy goals, including nationalized health care and guaranteed income. It wantonly sacrifices the seriousness of solving climate change in favor of shamelessly pushing a much larger liberal agenda,” Heather writes. “We can do better.”

There’s more: A trio of high-ranking Republicans also took to pen and paper to reiterate comments made in last week’s climate change hearings. Reps. John Shimkus (Illinois), Greg Walden (Oregon) and Fred Upton (Michigan) co-authored Republicans have a better solution to climate change (Real Clear Politics) “These are bipartisan solutions we must seize on to deliver real results for the American people,” they wrote.

We are eager to share with them the perfect solution with broad appeal.

How will your hometown change? This interactive map lets you look at what the climate will be like 60 years from now. I looked up Bangor, Maine, a few towns over from where I grew up. It’s going to be an average of seven degrees hotter and 27 percent wetter than it is now, resembling New Jersey. I guess the silver lining is I won’t be around to know! 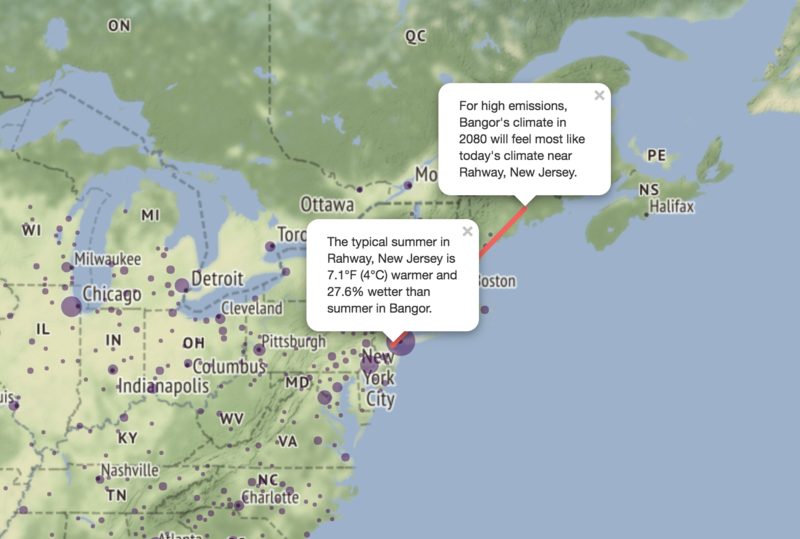 The Sunshine Statecrushing it: Florida jumped the EcoRight fold this week when former Rep. Carlos Curbelo penned the op-ed, We cannot run from climate change, especially not the GOP. (Real Clear Politics) “I am one of a small but growing group of Republicans who recognize climate change and believe conservatives must find a market-centered approach to solving it. For me, the issue is personal  just like it is for the 59 percent of Americans who say the changing climate is affecting their local communities,” he writes. “As a private citizen, I’m continuing to support common-sense ideas to address climate change. It’s why I joined Columbia University’s Center on Global Energy Policy as a distinguished visiting fellow. And it’s why I have recently joined the board of advisers for the Alliance for Market Solutions.” It was also announced this week that Curbelo has joined The Nature Conservancy’s Florida board of trustees, a volunteer board of 20 members. “I feel fortunate to continue my work on climate and the environment through an organization that understands we can only succeed by building consensus and promoting bipartisan support for the solutions that will heal the planet and secure the future,” he said.

At the end of last week, Rep. Francis Rooney introduced with delegation mate Rep. Matt Gaetz a resolution “expressing the sense of the House of Representatives that sea level rise and flooding are of urgent concern impacting Florida that require proactive measures for community planning and the states tourism-based economy to adapt.” Rooney is loud spoken about the need to address climate change and will co-chair the House Climate Solutions Caucus with Rep. Ted Deutch. “Sea-level rise, storm surge and flooding currently threaten millions of homes across the state of Florida. I introduced this resolution to express my grave concern about the dangers associated with rising seas, and to stress the need to proactively prepare for future effects, such as increased risks of flooding from stronger hurricanes,” Rooney said.

Science is science: The House Committee on Science, Space, and Technology held its first climate change hearing of the year, a week after the Energy and Commerce and the Natural Resources committees held their own hearings. Unlike years past when panels tilted in favor of climate hoaxers, the GOP chose as their witness EcoRight friend and scientist Joseph Majkut from Niskanen Center, which advocates for free enterprise solutions to climate change. “The way I think about it is that it’s not that there’s a temperature where human flourishing is maximal. Science can’t really tell us that,” Majkut told Committee members. “What we do know is that we’ve built our society around temperatures that we’ve encountered over the last 200, 300 years… We’re fixing to change it quite a bit and that rapid transition is a cause for concern.”

The Committee’s ranking member, Rep. Frank Lucas from Oklahoma, took a pragmatic approach to the subject: “Droughts and heat waves come and go naturally, but the changing climate has intensified their impacts,” Lucas said in his opening remarks. “We know the climate is changing and that global industrial activity has played a role in this phenomenon. But our communities, like the farmers and ranchers in my district, need to know more about the extent to which a changing climate affects short- and long-term weather patterns.”

In prepared testimony, Majkut wrote: “No matter your beliefs about the proper size and scope of government, the reality is that government must act to reduce the risks of climate change, and it already is doing so in several areas. But at present, far too many tons of CO2 are emitted here, and abroad, without sufficient regard to the damages they will cause future generations. In the long term, that will make us worse off. The responses to this problem do not have to be onerous government regulation and mandates, and they don’t have to be hasty. It wouldn’t be wise to halt emissions tomorrow or prevent future economic growth, but we could be doing much more to reduce emissions here in the United States beyond the already laudable reductions we’ve seen in the last 10 years. Congress should pursue new solutions to outpace and underspend the mix of regulations and subsidies that we have today. There is no better innovative force than the private sector, but if you really want energy innovation, you need to show innovators there is a market waiting for them.”

On finding common ground: Addressing the National Association of Regulatory Utility Commissioners, Alaskan Senator Lisa Murkowski said she disagrees with those who say “there is no way we can figure things out in energy space.” Referencing the “so-called New Green Deal,” she explained that any low or no carbon solution has to include nuclear power. “Even though I come from fossil fuel production state, I am aggressive and bullish on the future for nuclear… But we have to deal with the waste issue. Avoiding the political discussion is not getting us there.” Given the impacts already being experienced in her home state, Murkowski has been vocal on climate change, “it is literally there at our front door.” Together with the previous ranking member of the Senate Energy and Natural Resources Committee, has long pushed for bipartisan comprehensive energy reform. “A refreshed energy bill is one of things on my to do list.”

It’s not too late to send her (or one of our other heroes) an EcoRight Valentine as a thanks for her hard work:

For #ValentinesDay we’re spreading the #EcoRight love! One of our EcoRight crushes is @lisamurkowski who understands the reality of #climatechange and has called out members of her own party for petty bickering on the issue. Thank you for your leadership! #EcoRightLoveLetter pic.twitter.com/VSdFz1HE9S
 republicEn | E&EI (@republicEn) February 14, 2019

One cat thing: Surely you remember Fluffy the Laptop Cat? She had to go to kitty rehab this week after eating an Adderall and while she’s back home, she won’t come out of hiding. All good thoughts and prayers for her continued recovery and her forgiveness for my stuffing her in a cat carrier to take her to the scary vet.

May your weekend be long and relaxing.