This week’s must read: Bob Inglis penned an open letter to Minority Leader Kevin McCarthy asking he appoint an EcoRighter to the House Select Committee on the Climate Crisis (The Hill). “If a select committee is populated by disputers of the science,” Bob wrote. “They will deepen the caricature of the GOP as a party out of step with the new realities.

Case in point: Young conservatives have little place to turn in the current environment, according to spokesperson Chris Casey in his most recent Houston Chronicle op-ed. “The moment needs more Republicans willing to exercise courageous leadership, cross the aisle, take a seat at the bill-drafting table and be part of the process,” Chris said. “No wonder candidates with an R next to their names from purple districts lost. Their association with such a short-sighted refusal to accept [climate] reality was too much to overcome.”

From Bob’s mouth to Rooney’s ears: Florida’s Rep. Francis Rooney, who has swiftly emerged as one of the most vocal pro-climate action conservatives in Congress, is vying for the ranking member honors of the House Select Committee on the Climate Crisis. “It might be interpreted as a less than positive thing if someone who is made ranking member doesn’t really care about climate change,” Rooney told the Washington Examiner while expressing doubt he’ll get it due to his voting record.

Bob’s reaction: “This is an incredible opportunity for Republicans to reset on climate change and step forward with free enterprise solutions and engage constructively.”

I will be working on how to specifically address climate change by advocating a specific policy solution. Here’s my WSJ op-ed. More to come in days, weeks & months ahead. I welcome your constructive feedback. . https://t.co/JbFu5c74NL
 Ryan Costello (@RyanCostello) January 8, 2019

“My party will never earn the votes of millennials unless it gets serious about finding [climate] solutions,” Costello wrote in an opinion piece published by the Wall Street Journal. “If Republicans don’t adapt by offering meaningful solutions, the midterm losses could be only the beginning.” In Congress, Costello was a member of the House Climate Solutions Caucus. He referred to climate change “the issue of our time” after President Trump dismissed the Fourth National Climate Assessment, a report issued by his own Administration.

The carbon dividend is a mechanism by which a gradually rising fee is imposed on carbon dioxide emissions at the point where those emissions enter the economy. The proceeds will then be returned to Americans as quarterly dividend checks.

“Any time you talk about solving a really big complicated issue, a lot of Americans ask how will you get into my pocket on this one,” Costello said in a Washington Examiner interview. “The response here is we will actually put money in your pocket and over the long-term address climate change…I don’t see a solution to climate change other than this.”

Climate change impacts nonpartisan: In an interview with The Guardian, Katharine Hayhoe, atmospheric scientist, director of the Climate Science Center at Texas Tech University, and dear friend to the EcoRight, unleashed about recent climate assessments, public perceptions on climate change, and climate denial. 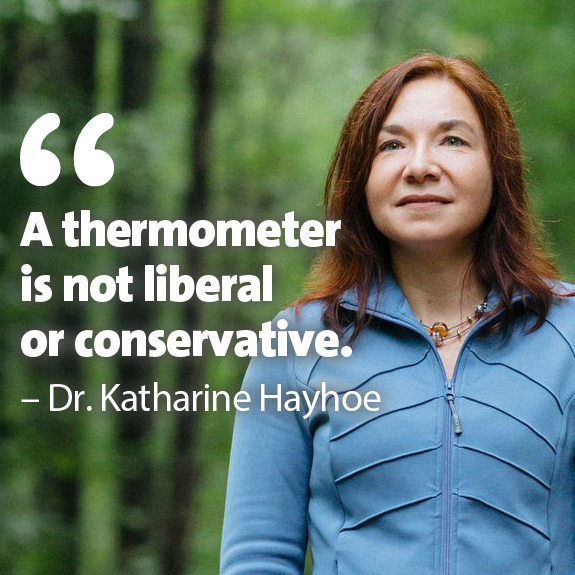 “It’s a vicious cycle. The more doom-filled reports the scientists release, the stronger the pushback from politicians whose power, ideology and funding depends on maintaining the status quo, and who are supported by those who fear the solutions to climate change more than they fear its impacts,” she said. “Opposition to climate change is a symptom of a society that is politically polarised between those who cling to the past and those who recognise the need for a better future.” When it comes to acting on climate change, she said the most important step is “to accelerate the realisation that we have to act” by “connecting the dots to show that the impacts are not distant any more: they are here and they affect our lives.”

“We can’t give in to despair,” she advises in a 2018 TEDWomen talk. “We have to go out and look for the hope we need to inspire us to act — and that hope begins with a conversation, today.” You can check out her full talk below.

Let it snow: In the DC metro region, we are battening down the hatches for potential snowfall this weekend, though I probably jinxed it by bringing out the shovel. As always, wishing you the best weekend.