How is it still January?

Greetings and happy Friday. We are slogging through the dregs of the month, buoyed only by the strong will of the EcoRight.

College Republicans send message: Led by the American Conservation Coalition (ACC), a millennial-founded and driven group which empowers conservatives to re-engage on environmental conversations, 41 state college Republican chairmen signed a letter encouraging conservative action on clean energy and environmental issues. “A conservative approach to renewable energy, land conservation, sportsmen’s rights, and our agricultural system will allow America to expand its position as a global energy leader, while embracing the values of stewardship that date back more than a century to President Theodore Roosevelt,” the letter reads. “As leaders, both on campus and in our states, we firmly believe that environmental stewardship is important, deserves our attention, and should employ a market-centric solution.” States which signed the letter include Florida, Texas, and Ohio. According to ACC communications director Bethany Bowra, while the letter doesn’t specifically address climate change, “As conservatives, we believe innovation, clean energy and free-market policies are the answers to climate-related issues.”

Rooney follows through: As he said he would, Rep. Francis Rooney from Florida has re-upped his support for the Energy Innovation and Carbon Dividend Act, the same bill he supported with Rep. Brian Fitzpatrick last year. The bill would impose a tax of $15 per ton of carbon dioxide in 2019, increasing $10 each year to nearly $100 per ton by 2030, and potentially higher if the emissions targets are not met. All the revenues are returned to the public in the form of a dividend. “I am supportive of a carbon fee as a non-regulatory, revenue-neutral and market-driven incentive to move toward natural gas and away from coal, and to support emerging alternate sources of energy,” Rooney told the Washington Examiner. “This bill provides a method of ensuring that any fees are rebated back to the public.”

Americans mostly agree (say what?): Nearly half of Americans report they are experiencing impacts of global warming right now, according to a national survey by our friends at the George Mason University Center on Climate Change Communication and the Yale Program on Climate Change Communication. The findings, as reported in Climate Change in the American Mind, indicate a shift in thinking away from climate change being “a polar bear problem, not a people problem,” according to GMU’s Ed Maibach, a lead researcher on the report. The survey also found that 73 percent of Americans say global warming is happening, 62 percent understand that the warming is mostly caused by human activities, and 69 percent are at least “somewhat worried” about it.

“The thing that is most encouraging in these polls is that they show the public has now become aware that climate change is here and now,” Bob Inglis told NBC News. “They understand it’s not decades away and it’s not in some other place. That is a huge change.”

Climate jester: The shutdown is this week’s climate jester. As reported by The Hill, the public can no longer access the National Oceanic and Atmospheric Administration’s (NOAA) climate data because of the partial government shutdown, on it’s 34th day at posting time. Visitors to the National Climatic Data Center website are redirected to a page that says, “Access is not available at this time due to a lapse in appropriation.” A national global temperature report typically released mid-January by NOAA and NASA is also being delayed according to The New York Times. The information is vital to climate scientists studying temperature trends.

Photo of the week: Look at our guy Alex Bozmoski getting passionate about a carbon tax at Liberty Con. #WeLoveYouAlex 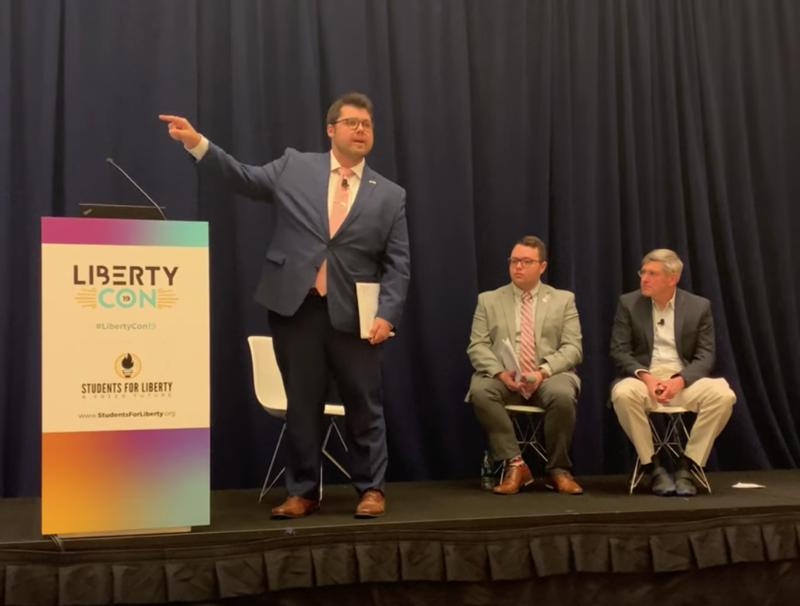 Curbelo joins DEPLOY/US: In addition to his other climate-related, post-Capitol Hill gigs, Carlos Curbelo has joined the nonprofit DEPLOY/US as a senior fellow. The group was founded in 2015 and is working on bipartisan climate policy solutions. (We are sensing a trend…)

And I’m excited to join the @DEPLOY_US team and its important efforts to expand the coalition for sensible #climatepolicy #climateaction https://t.co/6qXLVcWi96
 Carlos Curbelo (@carloslcurbelo) January 22, 2019

And that’s it for me. Next week I will come to you from February!