Welcome to 2019! The EcoRight has high hopes for the year ahead. Here’s why:

Mayor Jim Brainard leads the practical climate fight from Carmel, Indiana and has his pulse on the feelings of mayors across the U.S. “I think every mayor in the country would say it’s their responsibility to do something” about climate change. “Our mayors are not sitting back. The mayors are the closest elected officials to the people and the mayors can make this happen regardless of what the federal government does.”

Conservative Congressman Francis Rooney continues to amp up his interest in acting on climate change. Rooney not only accepts climate change science, but also thinks the U.S. needs to get tough in our response, which is why he’s a lead sponsor of a carbon tax proposal. “To me, it’s an opportunity to lead. I’ll talk to these conservative groups and they’ll say ‘why did you introduce a carbon tax bill’ and I’ll say ‘because I don’t think we need to burn coal.’ And a carbon tax is the most market-oriented, non-bureaucratic, efficient way I can see to kill off coal,” he said in an interview with the Fort Myers News-Press. Just elected to a second term in Florida, he pointed out the need to respond to the concerns of younger generations of voters. “I talk to our young people all the time and they are more environmentally sensitive. They’re more pro-alternative energy. They get the natural gas thing instead of coal. And I’d like to use environmental issues as a way to reach out to them.” In a separate interview with NBC-2 Rooney pointed out: “If there is any state whose people should be embracing climate change, it’s Florida. We are the state most at risk for sea level rise than any.” He is expected to reintroduce a carbon tax bill early in 2019.

Even Sen. John Cornyn (not a usual suspect) shared on Twitter an EcoRight themed editorial from the Wall Street Journal over the holidays:

The left favors green socialism, while the right begins to discover the uses of a carbon tax, writes @HolmanJenkinshttps://t.co/k5En3dLZ82 via @WSJOpinion
 Senator John Cornyn (@JohnCornyn) December 26, 2018

Related, the Houston Chronicle made a direct appeal to the senior senator from Texas over some other climate-related tweets of a more sarcastic nature: While climate change hits Texas, Cornyn tweets. “Government needn’t act alone, but left solely to their own devices, companies will naturally prioritize solutions that return short-term gains. Congress could help ensure that long-term dangers are addressed, too. Instead, Texans are asked to settle for silence and skepticism from its senior senator, and for that matter, its junior senator, too. We deserve better.”

A message from the Editorial Board at @HoustonChron for Senator @JohnCornyn – We need your leadership on climate. Our #Republican party needs to bring solutions, not avoidance. #EcoRight @cclconservative @republicEn https://t.co/Ki0SBL3xwY
 Jim Tolbert (@JimTolbertNC) January 3, 2019

And a Letter to the Editor from the Portland Press Herald in Portland, Maine references this very applicable Winston Churchill quote: “You can always count on Americans to do the right thing  only after they have tried everything else.”

This week’s must watch: NBC’s Meet the Press devoted their entire program last Sunday to climate change, and featured former Florida Rep. Carlos Curbelo as a guest to talk about the carbon tax, which he called “the most efficient, the most logical, and probably the most politically viable solution.” Here’s the relevant Curbelo portion of the show:

This week’s must read: Our spokesperson Joe Pinion writes, Climate change denial is killing the GOP’s future (The Hill) “Republicans have stepped away from the table when we should be leading the conversation on the climate solutions and energy policies that will define the 21st century. That does not require Republicans to espouse the government-centric gospel of global warming preferred by the political left, or co-sign Alexandria Ocasio-Cortez’s “Green New Deal.” But it does mean that we must have the courage to embrace real free-market solutions to combat the undeniable realities of climate change. Otherwise, the decisions that shape tomorrow’s energy and environmental landscape will be bereft of conservative influence, and we will have nobody to blame but ourselves.”

Americans support action: A Washington Post survey taken after the annual international climate meeting in December in Poland found that 73 percent of Americans believe the U.S. should take climate action, even if China does not, including 53 percent of Republicans and Independents leaning Republican. Only 19 percent of Republicans said the U.S. should only take action if China does and 28 percent indicated we shouldn’t act at all. Policymakers: take note!

Inspired by the Great British Bake Off, I got my baking on and even made the pictured yule log. I hope your holidays were likewise joyous and fueled you for the year ahead. 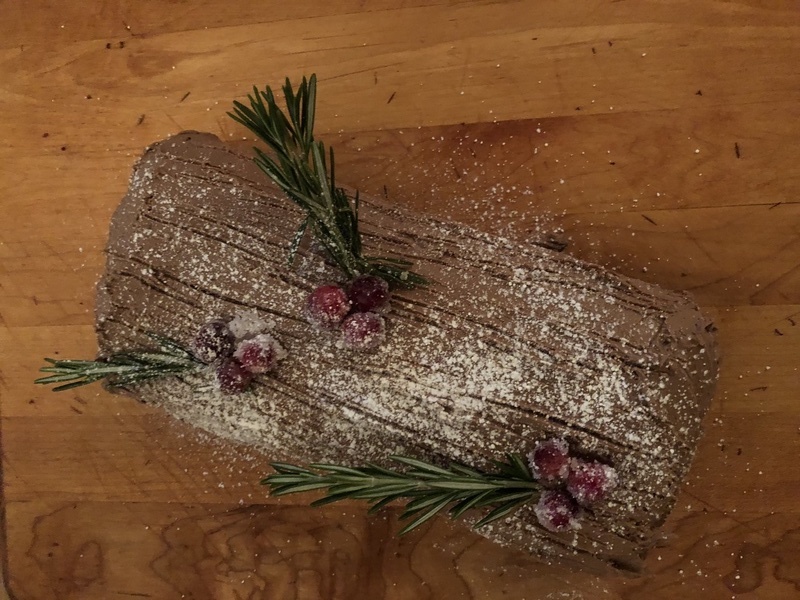