Record-high nighttime lows are what we’re bracing for in the DC Metro area this weekend; our heat wave inspires me to play Cruel Summer on repeat.

Moonshot: Fifty years ago this weekend, Apollo 11 landed on the moon. Our fearless leader Bob Inglis likes to say that if we can walk on the moon, we can solve climate change. “If you can put it in the context of opportunity and calling to light up the world,” he has said about climate solutions. “Then you get that moonshot kind of optimism and determination.” The USA Today editorial board jumped on the moonshot bandwagon with We sent a man to the moon. Now let’s save the planet. “If there is a great scientific and engineering puzzle that needs to be solved now, it is climate change,” they write. “The same combination of determination and smarts that landed men on the moon can, and must, be deployed to avert the catastrophe of rising sea levels, extreme weather and other disastrous effects of the buildup of heat-trapping greenhouse gases in the atmosphere.” ????

It’s getting hot in here: The House and Senate energy committees were full throttle this week, both sides moving a score of clean energy related bills. Under the leadership of Senator Lisa Murkowski, the Senate Energy and Natural Resources Committee passed 22 billsall but one with bipartisan support. “I think if you look to the details of what we’ve just moved out of committee, there is a great deal of substance,” she said. “Whether it’s what we have advanced with nuclear energy and the leadership there, whether it’s the measures on efficiency, whether it’s our critical minerals.” Bills passed include:

Over in the House, the Energy and Commerce Committee considered 26 bills ranging from cybersecurity to energy efficiency. And according to the Washington Examiner’s Josh Siegel, the LEADING Act has a House companion:

NEW: GOP @RepDanCrenshaw just introduced a bipartisan bill that would require DOE to establish a carbon capture research program for gas plants. It’s the House version of the LEADING Act, passed by the Senate ENR Committee this week. Democrat @RepCuellar is also on the bill
 Joshua Siegel (@SiegelScribe) July 18, 2019

Speaking of energy efficiency, EE super duo Senators Rob Portman and Jeanne Shaheen reintroduced the bipartisan Energy Savings and Industrial Competitiveness Act, which will improve energy efficiency in three key sectorsbuildings, industrial, and the federal government. Portman said the building code measures alone would save consumers $13 billion a year, and would be the equivalent in emissions savings of taking 11 million cars off the road within 15 years. The measure has overwhelmingly passed the Senate in the past, but perpetually stalls out in the House. “When we first introduced this legislation, Rob had black hair,” joked Shaheen.

“You gotta do some stretches, some exercises, before you take that big swing,” Bob Inglis said of this week’s climate-related action. “We want to celebrate people who are in the batting box taking swings.”

This week’s must read: How might Republicans win young voters? (National Review) “History shows that modern Republicans can be aspirational and idealistic while remaining true to conservative principles and, in doing so, win back the hearts and minds of the next generation,” writes Nate Hochman. “The issue of climate change, to take one example  an issue that many young people of all political sympathies are rightly concerned with  should be reclaimed from the Left. Environmentalism is, at its heart, a deeply conservative impulse.”

Buzz around town: ??This article on a highly toxic pesticide that kills bees is stuck in my head, EPA expands use of pesticide ‘very highly toxic’ to bees. An excerpt: “The Environmental Protection Agency (EPA) announced Friday it would allow for the expanded use of a pesticide it considers toxic to bees, a move that comes just days after the Trump administration said it was suspending data collection on bee populations,” according to reporting by The Hill. The U.S. Department of Agriculture has/had one of the few remaining government data sets that monitor bee populations and loss. Kind of makes me want to go ahead with that lingering idea to raise bees in my backyard. ??

June swoon: June 2019 was the hottest June ever recorded globally, according the the National Oceanic and Atmospheric Administration (NOAA) and nine of the 10 hottest Junes in 140 years of record-keeping have occurred in the past nine years. Forty-one countries may have set their record warmest June, including Bangladesh, Hungary, Iraq, Nicaragua, the Philippines and Turkey. June 2019 also marked the 414th consecutive month that the planet’s temperature was warmer-than-average, NOAA said. That dates back to 1984, during the first Reagan Administration. The NOAA image below illustrates what the world collectively experienced last month: 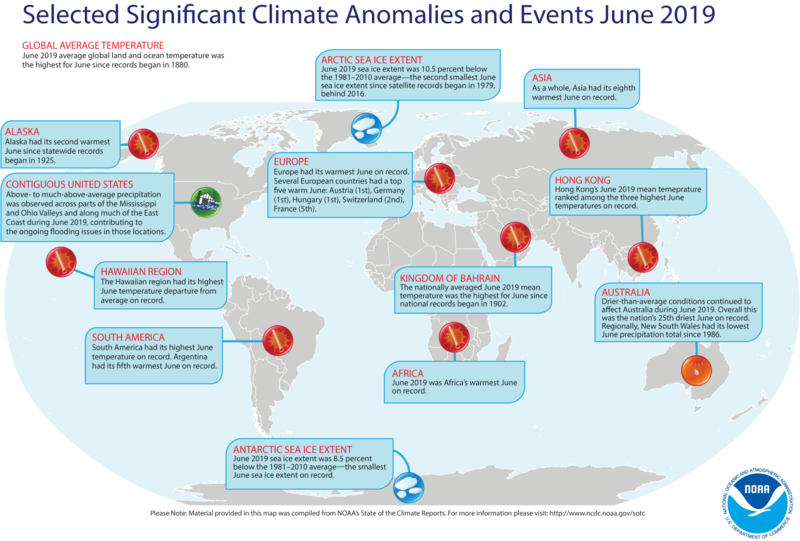 That’s it for me. If you’re in a dangerously hot area of the country, take caution. If you’re not, send popsicles.