????Happy Flag Day, America! ????Also, a shout out in advance of Fathers Day to all the dads out there.

What an exciting week, which kicked off with an EcoRight family reunion at the Citizens Climate Lobby Conservative Caucus reception. Here Alex and I got to meet some of our Spokespeople for the first time, as well as connect with friends old and new. 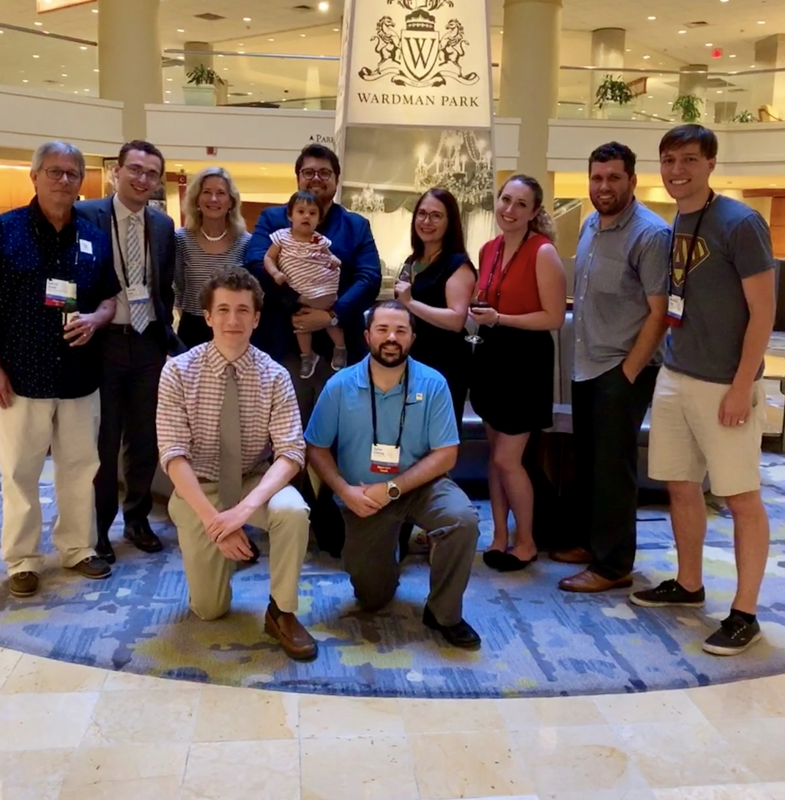 Front row, left to right: Spokespeople Ben Mutolo and Tyler Gillette. Back row: super member Larry Howe, Spokesperson Jacob Abel, super member Zaurie Zimmerman, republicEn.org’s Alex and Penny (youngest EcoRighter), yours truly, and Spokespeople Kiera O’Brien, Chris Casey, and Nick Huey. Thanks for the great conversation and the hard work everyone is doing. One more fun thing: everyone I met at this event said, “oh, you’re the Chelsea who sends that great email every week.” Thanks for reading and finding value in this weekly newsletter!

This week’s must read: We are sorry to put up a must read that is behind a paywall, but this Wall Street Journal article is worth trying to get access to. In case that proves difficult, let us break out the highlights from Some Republican Lawmakers Break With Party on Climate Change. “A small but growing number of Republican lawmakers are urging action on climate change, driven by shifting sentiment among GOP voters and the effects of global warming, from stronger hurricanes to more-destructive wildfires,” the article reads.

I can email the copy in the body of an email to anyone interested in reading more.

Climate Jester: The White House tried to muzzle a State Department official from discussing climate science in his testimony last week, according to the Washington Post. “Climate change effects could undermine important international systems on which the U.S. is critically dependent, such as trade routes, food and energy supplies, the global economy, and domestic stability abroad,” Rod Schoonover, a State Department intelligence officer, told members of the House Intelligence Committee in person. “Most countries, if not all, are already unable to fully respond to the risks posed by climate-linked hazards under present conditions.” While he was present to answer questions orally, he did not provide written testimony for the permanent Congressional Record in advance of the hearinga common practice for those appearing before Congressafter the White House refused to approve it. The State Department likewise refused to edit out the language the White House had rejected. One of those who objected to Schoonover’s written testimony was National Security Council official William Happer, an architect of the Trump administration’s climate policy and a known climate science disputer.

If you want to dig in deeper, this tweet thread from our friend Andrew Holland at the American Security Project is both frightening and entertaining.

Here’s Josh, spending his Saturday night raging against the dying of the light.

Hands down, Happer (and any unnamed staff likewise muzzling an intelligence analyst from showing the full climate picture) is not this week’s, but this month’s climate jester.

Climate Prize: Reps. Dan Lipinski (D-IL) and Jeff Fortenberry (R-NE) have reintroduced the Challenges and Prizes for Climate Act of 2019 to spur innovation in key areas critical to combating climate change. The bipartisan list of co-sponsors includes: Reps. Brian Fitzpatrick (PA-1), Charlie Crist (FL-13), Francis Rooney (FL-19), Ted Deutch (FL-22), Jennifer González-Colón (Puerto Rico), Chris Smith (NJ-4), and Derek Kilmer (WA-6). “I’m interested in solutions to environmental securitythis bill will help spur necessary innovation and bridge us to a more sustainable future,” Fortenberry said. The bill would direct the Secretary of Energy to establish a program called “Climate Solutions Challenges” to organize prize competitions around five topics, including carbon capture, energy efficiency, energy storage, climate resiliency, and data analytics to better understand the changing climate and weather patterns. “Federal and private sector prize competitions have led to incredible breakthroughs and have the opportunity to play an important role in addressing the global climate change crisis,” Lipinski said in a written statement. The bill was referred to the House Science Committee, of which Lipinski, González-Colón, and Crist are members. (That helps the bill’s prospects because those members can usher it through the committee process.)

Capture that carbon: Ohio Senator Rob. Portman joined Colorado Democratic Senator Michael Bennet to introduce The Carbon Capture Improvement Act, a bill to make it easier for power plants and industrial facilities to finance the purchase and installation of carbon capture, utilization, and storage equipment. The two previously pushed similar legislation in the last Congressional session. “This bill is a win-win for jobs and the environment, and I’m proud to continue my work on this issue with Senator Bennet,” said Portman in a written statement. “Carbon capture is a common-sense solution that will allow states like Ohio to continue to utilize our natural resources while protecting our environment at the same time. This bipartisan measure is supported by business groups, energy groups, and environmental groups alike, and I urge all of my colleagues to support it.”

“While the prospects for large-scale carbon capture in the United States are promising, costs remain relatively high,” according to the bill’s text. “Lowering the financing costs for carbon dioxide capture projects would accelerate the deployment of this technology.” The bill would allow state or local governments to issue tax-exempt private activity bonds for financing the installation of equipment that captures and stores at least 65 percent of carbon dioxide from an eligible facility. If less than 65 percent CO2 is captured, then bonds can be issued in proportion to that percent. The bill will be referred to the Senate Finance Committee, of which both senators are members.

Younger generations care, but do they act? According to a report published by the Yale Program on Climate Change Communication and George Mason University Center for Climate Change Communication, nearly three-quarters of Millennials say climate change is “personally important” to them and 37 percent are willing to share their views with their elected officials. But only 13 percent had actually reached out to lawmakers in the last year.

“It’s not surprising that relatively few people in any generation report having contacted government officials in the past 12 months. Most Americans have no experience doing that, no one has ever asked them to, and many don’t know how,” Anthony Leiserowitz, the director of the Yale Program, told Newsweek.

As has been found in previous studies, younger Republicans are more concerned about climate change than older generations.

According to the report, “In 2020, for the first time, the youngest generations (both Millennial and iGen  born in or after 1997) are projected to make up the largest proportion of registered voters. Whether they will actually vote and whether concern about the climate will be a priority for them remains unclear.”

“Young Republicans in particular may be critical to bridging the political divide on climate change and building bipartisan support for reducing carbon emissions,” the report authors conclude.

Related, GOP pollster Frank Luntz is warning Republican lawmakers that attitudes are quickly shifting on climate change and they risk alienating voters if they ignore the issue. According to The Hill, “In a memo circulated to Republican congressional offices on Wednesday, Luntz Global Partners warned that 58 percent of Americans, as well as 58 percent of GOP voters under the age of 40, are more concerned about climate change than they were just one year ago.”

Quote of week: Rep. Mike McCaul (R, TX-10), signaled support for action on climate change saying, “We can all agree that climate is changing. We need to take positive steps to address it.” McCaul is the highest-ranking Republican member of the House Foreign Affairs Committee. ??????

This week’s must watch: Three former Republican EPA Administrators serving under Republican presidents from Ronald Reagan to George W. Bush talk about the current state of the agency today and why science is important. (ABC News) “We’re quite concerned about the direction EPA is taking in this Administration,” says Lee Thomas, who served under Reagan. Catch the full interview below:

Special delivery: We mentioned last week that Bob is on the Boys State circuit. In both Idaho and Illinois, he collected signatures to a letter to key lawmakers thanking them for their environmental leadership and emphasizing the importance of climate change to this younger generation. Here he is delivering such a letter to Rep. John Shimkus.

That’s it for me. I’m going to head outside to enjoy this beautiful (no, I’m not being sarcastic) June weather. Have a nice weekend.