We get an extra day this year to work on climate change! Funny story, my younger son was due on February 29th, but for the first and only time in his life, he was early. So a few days ago, he turned 16, not four.

Beware of bots: If there is one reason to give up Twitter, it’s because of the bots. This report from the BBC on misinformation on Twitter caught our eye. According to a study conducted by Brown University, “a quarter of posts about climate change on Twitter were written by bots.” Bots are computer programs, not humans, but they are disguised to look like humans, and these particular ones are trying to give “the impression there was a high level of climate change denial.” In other words, they are spreading lies and trying to deceive the Twitter-reading public. Double check your sources, always!

This week’s must read: Pressured by younger voters and an election, Republicans reluctantly embrace climate change (Newsweek): “The party has to expand. And not only that, putting the politics aside, this is good government,” GOP strategist Susan Del Percio says in the story. “This is what our government is supposed to do: protect us from potential disasters, which if we do nothing, not only will there be an environmental issue, there will be a huge economic impact on our country and the world.”

“One of the fears that Republicans have had is that acknowledging climate change means you’re advocating for big government and you’re throwing out the free market. But that’s not the case. It’s not binary,” Heather Reams, the executive director of Citizens for Responsible Energy Solutions and friend of the EcoRight, told Newsweek. “We’re not losing our principles or dismantling capitalism.”

Today’s must watch: In this short video, financial leaders talk about why climate change poses more than an environmental challenge.

“We don’t have a Federal Reserve to stabilize the world,” Larry Fink, CEO of Black Rock said. “This is bigger, it requires more planning…the actions have to begin now.”

Go, Utah, go! The Beehive State has done a 180 over where it was ten years ago on the issue of climate change. Back in 2010, the Utah state legislature passed a resolution denying climate change. But that position started to unravel over the last few years, thanks in part to vocal advocacy by young voters. As a result, two years ago, Gov. Gary Herbert signed a resolutions acknowledging climate change is a problem Utahns must address. And now, “the largely Republican state legislature is embracing a climate policy ‘roadmap‘ (prepared by an economic think tank from the University of Utah) that includes emissions reduction targets.” ??????

As Rep. John Curtis continues his popular #CurtisClimateChat on Twitter (check out this LTE supporting his action) it’s clear that Utah has a huge EcoRight heart. Whether you’re front Utah or not, join the conversation!

And one more Utah hit, Bob Inglis sat down for an interview with Utah Public Radio. 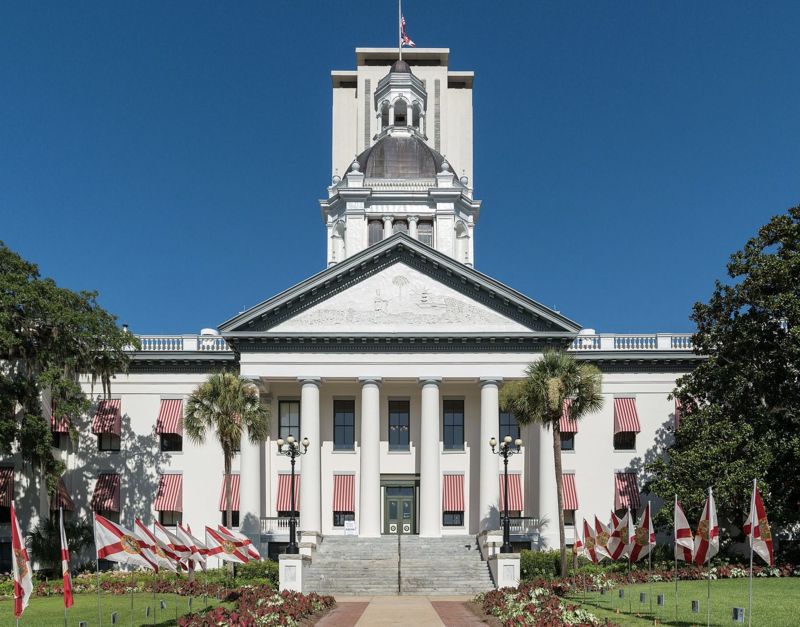 After serving less than six months in the first-in-the-nation role, Florida’s first chief resilience officer, Julia Nesheiwat, is leaving her post to join the Trump administration. Reaction from the Tampa Bay Times Editorial Board: “Nesheiwat raised expectations almost overnight in a state where the previous governor, now Republican Sen. Rick Scott, all but made climate change a taboo topic. The absence for so long of a strategy from Tallahassee has left it to cities and counties to confront how to protect billions in infrastructure from the threat of rising seas, extreme weather and other climate impacts…DeSantis excited activists and local officials who saw in Nesheiwat an open channel and a welcome change in thinking. He should work quickly to appoint a successor who shares the same sense of reality and appreciation for what a vocal advocate in Tallahassee can achieve.”

Know anyone who is up for the job?

Also from Florida, Sen. Marco Rubio, who recently joined the Senate Climate Solutions Caucus, recently said this: “Changes in our climate, such as the rise of sea levels, are measurable facts. Many communities in Florida are already dealing with the consequences of these changes and will have to adapt to and mitigate against their impact for decades to come. I look forward to working with my colleagues to find real and responsible solutions in a bipartisan way.”

Lastly, our spokesperson Lance Lawson’s latest op-ed, which originally ran as part of the Invading Seas Project, has now been reprinted in the Tallahassee Democrat, The Sun Sentinel, and Florida Today. That’s some reach! Congrats, Lance!

Miss our webinar? Did you have to miss our latest EcoRight webinar Living with Wildfire in the Era of Climate Change? We got you. You can catch a recording of it here. Listen to Canberran Tom Burmester speak about how he was personally affected by the destructive historic fires in Australia. Dr. Crystal Kolden of the University of Idaho also discussed how communities in the American West are dealing with the growing threat of wildfires  with hopeful results. 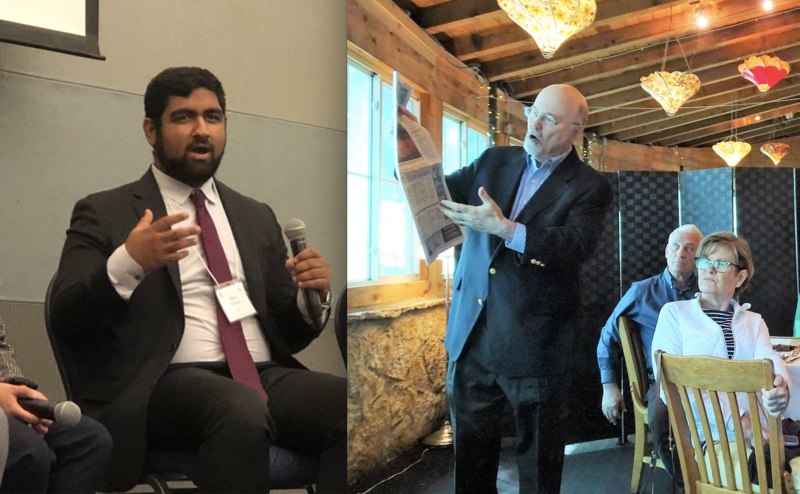 Spokespeople in the wild: Sahil Nandwani (left) spoke on a panel at the Southern California Regional Citizens Climate Lobby Conference last week. And Larry Linenschmidt (right) making progress for us in Texas. Kudos to both these guys for representing us and the EcoRight! 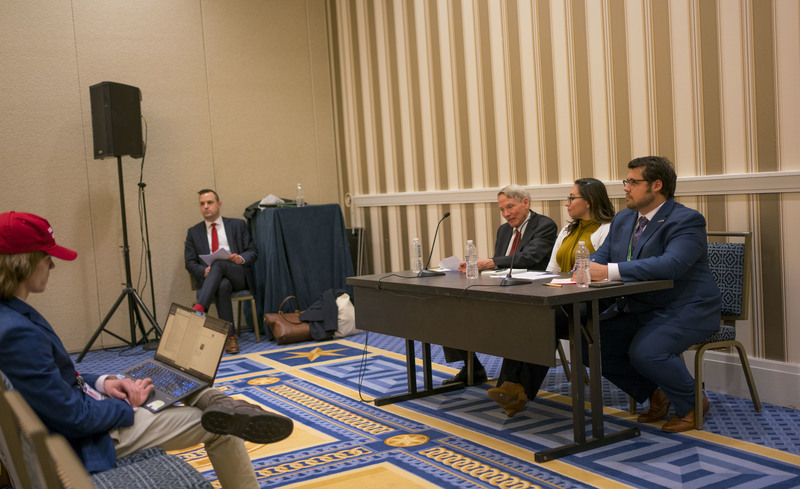 Bozmoski versus Happer, round one: Our own Alex Bozmoski was on a panel at the Conservative Political Action Conference (CPAC) yesterday with former Trump advisor and climate disputer William Happer. The best account of the exchange we have seen so far came from E&E Daily:

“‘It’s very hard to see how CO2’s going to make much difference if you double or triple it. It’s because the effects of absorbing radiation, emitting radiation and cooling of the Earth have long since been saturated,’ Happer said. ‘If you double CO2, it makes less than a percent difference in the amount of radiation going in space,’ he continued.

Bozmoski was having none of it.

“‘This isn’t science. The papers discussed have not been peer-reviewed. They haven’t been presented to the American Geophysical Union or the Association for the Sciences of Limnology and Oceanography. They’re published on the CO2 Coalition’s website, and the presentations are given at CPAC and PragerU,’ Bozmoski said.” ???

Young Conservatives for Carbon Dividends (YCCD) founder (and republicEn spokesperson ) Kiera O’Brien said she’s “been having a lot of conversations with young people” who want the GOP to have its own climate agenda. “It’s all about changing hearts and minds,” she said. “And that is our victory.”

A scene from the YCCD booth.

And a scene from the republicEn.org booth (this year they didn’t place us next to Heritage)… 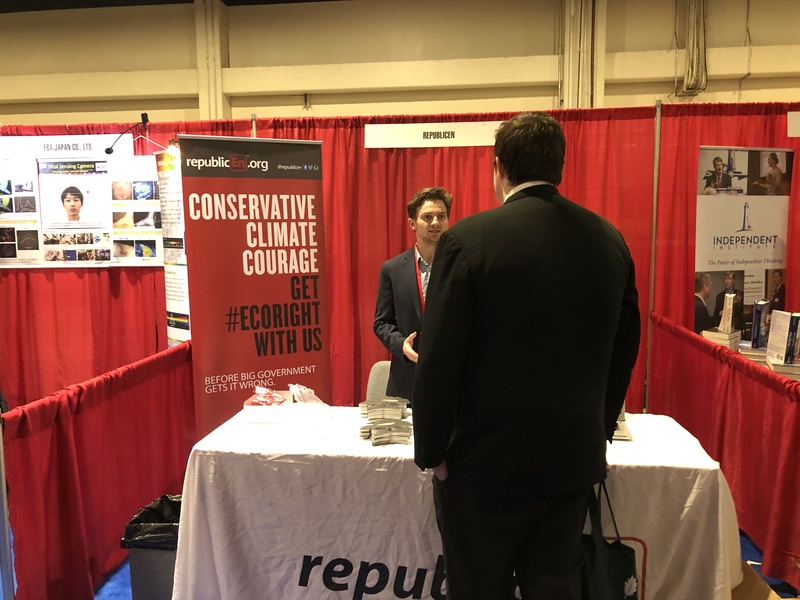 Guys, in the words of our fearless leader Bob Inglis: “We’re winning and the merchants of doubt know it!”

Enjoy your extra day in February! See you in March!