Happy March! Now that the shortest, most brutal month is out of the way, let the crocuses begin their bloom.

Legacy: We are so happy for one of our newest Spokespeople, John Sweeney from New York, who was published this week in The Hill. In How will Trump be remembered? That depends on climate action, John writes: “Trump has tremendous power to influence not only what the history books say about him, but which version of the future we get. An about-face on climate could prove to be the catalyst America needs to bring our political factions together in search of a solution. Just imagine if Trump put forth a bold plan for comprehensive climate action; conservative Republicans skeptical of climate science would likely heed his call. Rather than bickering about whether climate change is real, we could finally bring together our brightest scientific, economic, and technological minds from both left and right to unleash the power of American innovation and save the planet.”

Just say no to climate denialism: Former Ohio Governor John Kasich thinks its time for Republicans to stop being the party of climate change denial and to start formulating policy solutions, according to an interview with Axios. Highlighting remarks he gave at the University of British Columbia, he called climate change a “call to arms for me” and implored conservatives to “have a discussion instead of being in denial that this is a problem. You can’t just be a science denier.”

“We all evolve,” he said in the interview, pointing to the Fourth National Climate Assessment issued by the Administration last year. “As I see more and more evidence, especially from our government and scientists, you learn more. Let’s step it up.” He plans to lay out a “centrist” policy map, but did not provide specifics. “It’s not enough to say you don’t like [the Green New Deal] and not have something you can be for.” Of the shifting tide, he noted, some Republicans “are becoming concerned about the environment. Others are becoming concerned if they go to a town hall and they don’t have any answer. Change comes from the bottom up. It never comes top down. It is bottom up. The public is beginning to say: We want something done.” 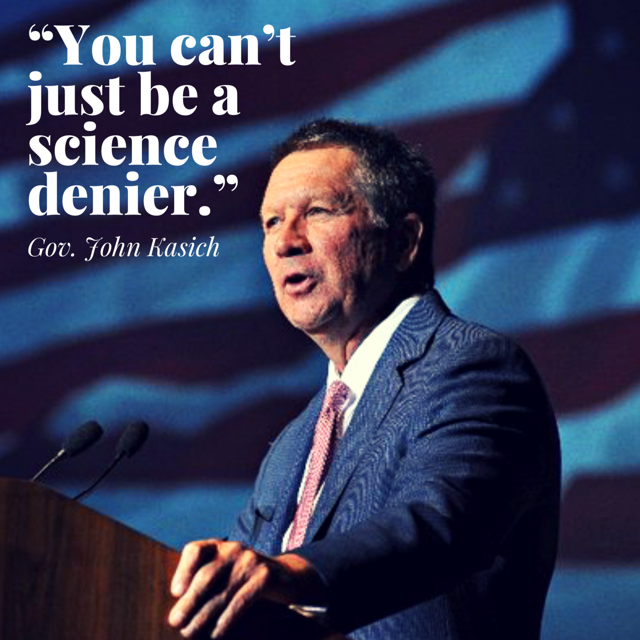 Not one but two climate jesters: We’ve been blissfully climate jester free. That streak ends now with a tie for the title this week.

Alaska Governor Mike Dunleavy. The previous state administration, led by Independent Governor Bill Walker, created a climate change task force, which in the fall, released a climate change strategy for the imperiled state. (It got its own section in the Fourth National Climate Assessment.) The new governor just rescinded the task force and the strategy. “Alaska’s footprint in terms of being a contributor to pollution or however you want to word it is pretty small compared to other states in the U.S.” Dunleavy told the Anchorage Daily News in December. So my focus has been trying to create jobs for our kids and grandkids so they don’t have to leave the state.” For erasing the progress made by the last administration without putting forward a revised climate action plan in a state on the front lines of climate change, Dunleavy is co-climate jester of the week along with…

The White House. Speaking of the Fourth National Climate Assessment, the White House is apparently poised to create a new, closed-door climate group, comprised mainly of those who challenge the science of climate change, to challenge the conclusions drawn by its own report. To best response so far has come from Katharine Hayhoe, who summarizes the move and just generally has an amazing take on the situation. Seriously, read the entire thread.

This week’s must read: EcoRight friend Joseph Majkut, who testified a few weeks ago as the Republican witness at a House Science Committee hearing, co-authored this op-ed with a fellow climate scientist: Congress just proved there is hope for honest discussion on climate change (The Hill is killing it with climate essays.) “…refreshingly, in our committee hearing, we heard a return to a functional and honest discussion of climate science. We talked about an aggressive shift to low-carbon energy. We talked about the potential of technology to reduce emissions and capture carbon from the atmosphere. We talked about how there is no magic bullet for climate and plenty of room for compromise over how to move forward.”

This week’s must listen: Bob Inglis was in Iowa, in the winter, and he’s NOT running for President. He talked to KXEL about price signals, the competition of ideas, and simple solutions to climate change.

That’s it for me. This weekend, I’m hosting my baby’s 15th birthday party, thus will have a house full of pizza-eating man boys! Send me thoughts and prayersand wine.