Beware of the Ides of March! After an overdosing cat, clogged kitchen sink, squirrels in the attack, and new roof scheduled for next week, I’m not sure what else can come my way while Mercury is in retrograde. But if it’s a caesar salad, send it along, extra croutons.

Lead the way: Spokesperson David Rokeach published an opinion essay in the Albany Times Union, Stefanik can champion climate action for GOP in which he suggests Rep. Elise Stefanik will be *the* Congresswoman from New York who leads us to climate action. “It’s about time elected officials show that there doesn’t need to be a gap between conservation and conservatism,” David writes. “The best chance for climate action to happen is for someone on the right (read: Stefanik) to champion a counterproposal to the Green New Deal.”

This week’s must read: Republicans who believe in climate change seek alternative to Green New Deal. More evidence that an EcoRight movement is under foot. “Ever since [Rep. Alexandria Ocasio-Cortez] began promoting the [Green New Deal] late last year, a growing number of House GOP lawmakers have been increasingly willing to say those four little words: ‘Climate change is real.’ And they’re warning the rest of their party that Republicans must push for alternative solutions before it’s too late.” Welcome to the party!

Profiles in common sense: The more media coverage conservative Georgetown, Texas Mayor Dale Ross gets, the more we hope other mayors learn of his leadership and follow his lead. Check out this Frontline interview with the renewable energy fan. A snippet: “I’m so enthusiastic about the young people in this country. They are going to be the future leaders and they understand, like I do, that climate change is real. If you don’t believe that, I don’t believe you’re being honest with yourself. I believe that experts like scientists can make that evaluation for me instead of some politician that wants to keep getting reelected.”

Hear us roar: In the Washington Post, the Senate Energy and Natural Resources Committee chair and ranking member, Alaska’s Senator Lisa Murkowski and West Virginia’s Senator Joe Manchin respectively, wrote It’s time to act on climate changeresponsibly. “Alaska and West Virginia know that resource development and environmental stewardship must move in tandem, which is why we are committed to putting forward bipartisan solutions to help address climate change,” they write. “Congress is in the middle of a debate about the appropriate way to tackle climate change. This is often portrayed as an issue with just two sides  those who support drastic, unattainable measures to reduce greenhouse-gas emissions, and those who want to do nothing. We believe the time for sensationalism is over. And we are seeking ideas that will bring people together, rather than drive them apart.”

This week’s must listen: “I was wrong before. Climate change is real.” So said Bob Inglis when he had his climate epiphany after tough love from his son. Listen to more in this Ways and Means podcast, How parenthood affects climate change skeptics.

Speaking of Bob: Join us March 21st from 1:00-2:00pm ET for an episode in our webinar series. Registration for “The Carbon Tax Bill  Ten Years Later” is free but space is filling up so reserve your spot here.

This week’s must watch: As reported last week, Louisiana’s Rep. Garret Graves is the newly minted (and EcoRight choice for) ranking member of the Select Committee on the Climate Crisis. Check out this profile of him: Meet the Republican Congressman trying to “redefine the narrative” on climate change. “Louisiana has already lost 2000 square miles of its coastline. If that happened to Rhode Island, we’d only have 49 states today,” he notes. That’s chilling, especially if you’re from Rhode Island.

Keep on talking: The former Ohio Governor John Kasich is on a roll, raising the volume of conservatives calling for climate action. The USA Today published this piece he authored: Forget the New Green Deal. We need climate solutions from free-market moderates. “We’ve finally reached a tipping point. Scientists, business leaders, 13 federal government agenciesincluding the Defense Departmentand most of our allies around the world are convinced that climate change is happening and that strong, concerted actions are needed to minimize its effects,” Kasich writes. “I am convinced that conservatives and moderates, including many Democrats, can agree on a commonsense set of policies. They would be based on responsible economic principles of free-market capitalism and personal choice, not coercion. They would actually reduce regulation and lighten the heavy hand of government, while stimulating job growth and the economy, encouraging innovation, benefiting working-class Americans and  most important  protecting and improving the environment we share with the world.”

What’s Carlos doing: Our EcoRight friend former Florida Rep. Carlos Curbleo tweeted this picture that gives us a hint of what he’s up to these days. (Hint: Hanging out with climate caucus buddy and former Pennsylvania Rep. Ryan Costello, it appears.)

That’s it from us! Luck of the Irish to you this weekend. 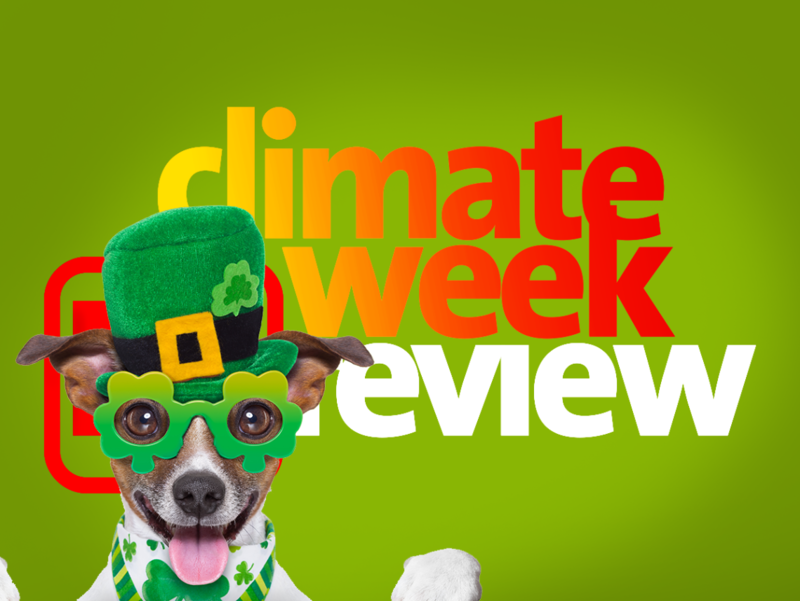