Hello! I come to you only slightly recovered from volunteering on the campaign for the non-partisan mayor’s race (you know how I love mayors) held in my town on Monday. My candidate won, and I won too because now I know I never want to work on a national campaign. #exhausting

Help wanted: In a shift from the previous administration, Florida Governor Ron DeSantis, who last month appointed a Chief Science Officer, announced he is now seeking a Chief Resilience Officer. The job will include coordinating Florida’s preparations for “environmental, physical and economic impacts of climate change, especially sea level rise,” according to a job posting. On that note, applications are being taken through the end of the month.

??And we think it’d be pretty cool to have a friend of the EcoRight in this position.??

The Chief Resilience Officer would work with the Florida Department of Environmental Protection and other agencies to: develop statewide resilience goals; identify resources already targeted towards resilience efforts; coordinate scientific data, research, and analysis needs across state agencies; and cultivate and maintain relationships with communities to plan for and implement resilience projects and ensure communities throughout Florida are climate ready. “My environmental policy is just to try to do things that benefit Floridians,” DeSantis has said.

Quote of the week: “The president’s comments on climate change are damaging because it gives an incentive for those who don’t place a high priority on the issue to go along with that,” said former Rep. Ryan Costello (R-PA) who now works for Americans for Carbon Dividends. “For the Republican Party to be a majority party in 10 years and in 20 years there will have to be a clear set of climate solutions as policies proposed and voted on, and what that is remains to be seen.”

Low cost, low drama, big results: Our friends at American Action Forum put the wonk in wonky on the regular, and their analysis is always spot on. “A well-designed, revenue-neutral carbon tax has the potential to have little or even beneficial impacts to the economy,” according to their latest findings. “In a comparison of policies, if the outcome is to seek the most benefits for the least cost, a market-based approach to emissions reduction is far superior to the more dramatic proposals that have been included in the GND.” Rather see for yourself? A picture says a thousand words: 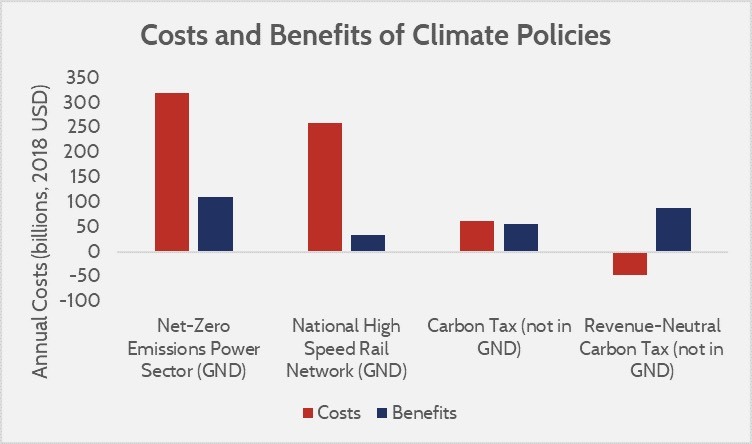 Related the Alliance for Market Solutions has found similar results in their analysis.

Republican lawmakers who oppose a #CarbonTax are usually motivated by a belief that their constituents will get a raw dealresearch demonstrates that concerns over the outsized impact that such a tax would have on Republican jurisdictions are unfounded.” https://t.co/vNtEA3IoHa
 AMSResearchOrg (@AMSResearchOrg) May 9, 2019

This week’s must read: Florida’s Rep. Rooney wants Republicans to embrace a carbon tax (Bloomberg Tax) Key takeaway: “Why do we always have to be the people saying no and burying our heads in the sand when scientists all around the world are saying, ‘We’ve got some problems here,'” Rooney says, calling his bill, HR 763, a free-market way to “head off something worse.”

Climate classifieds: We frequently get forwarded job announcements and thought this would be a good place to share them.