Happy Friday from Las Vegas! (Actually, at the time you’re getting this, I’m probably somewhere over middle America, en route to Vegas.) I’m currently accepting all good wishes, prayers, and positive energy for the marathon I’m running there on Sunday! To the race, I bring years of stamina from working to enact climate policy, which those of us in the trenches refer to as a marathon not a sprint.

(Just remember, what happens in Vegas stays in Vegas, even my finish time.)

This week’s must read: As you’ve gathered from the last few weeks, our EcoRight focus has been on Indiana. And we aren’t the only ones. Our friend Heather Reams from Citizens for Responsible Energy Solutions co-penned this op-ed with Indiana Conservative Alliance for Energy executive director Jared Noblitt. In Braun, Republicans, pursuing common-sense, bipartisan climate solutions, they write: “[Senator Mike] Braun should be applauded for his leadership. With the creation of this caucus, he plans to spread practical, economically-sound clean energy initiatives that align with conservative principles and will be able to gain bipartisan support.” ?????????? 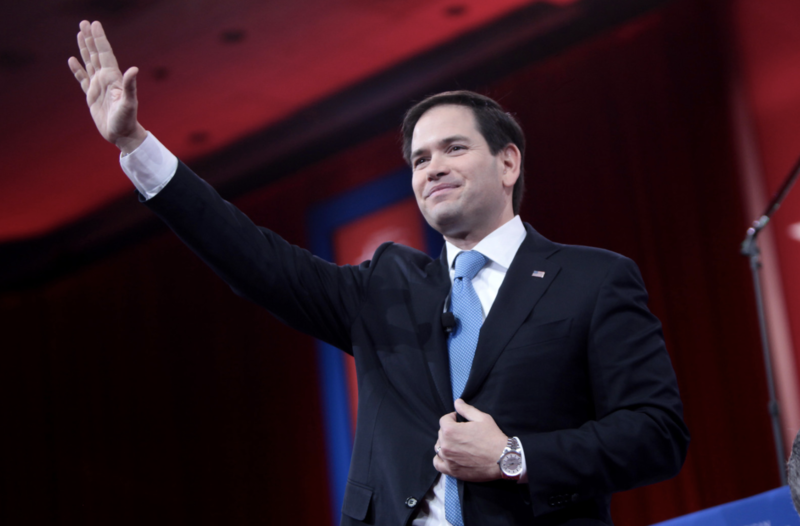 You are my sunshine (state): According to a scoop from the Washington Examiner, Florida Senator Marco Rubio is the latest Republican to join the Senate Climate Solutions Caucus. He joins colleagues Mitt Romney, Lisa Murkowski, and Lindsey Graham in getting behind caucus rockstar/co-founder Senator Mike Braun. Braun and Senator Chris Coons recently launched the bipartisan effort and have already been holding meetings. Back in August, Rubio said Floridians “must confront” climate change but suggested the focus shift from plans to reduce carbon emissions to adaptation. “Attempting to reverse engineer the U.S. economy to absolve our past climate sins  either through a carbon tax or some ‘Green New Deal’ scheme  will fail,” he wrote in an op-ed published in USA Today. As the caucus holds more listening sessions with experts and stakeholders, perhaps he will shift his thinking on solutions. ??

Five questions: Former Governor George Pataki of New York, who sought the Republican nomination for President in the last cycle was recently asked: had you become president, what chief issue would you have approached differently than President Trump?

His response: “The environment. I find it distressing that the administration is rolling back protections. With climate change, in 2005 we created a regional greenhouse gas initiative and eight states signed on. I thought it could have been a model. I’m still optimistic because of the technology. I was just reading about an artificial leaf that takes carbon dioxide out of the atmosphere and converts it to fuel. We can change the way we do agriculture so it releases less CO2. We can develop far more advanced battery storage so that wind and solar aren’t intermittent power sources. But we have to do it in way that creates opportunity and a global solution instead of just something we can pat ourselves on the back about.”

Forward march: The Chamber of Commerce, a long-time opponent of climate change policies, is shifting tactics. In a recent mission statement on climate change, the Chamber says: “The climate is changing and humans are contributing to these changes. We believe that there is much common ground on which all sides of this discussion could come together to address climate change with policies that are practical, flexible, predictable, and durable. We believe in a policy approach that acknowledges the costs of action and inaction and the competitiveness of the U.S. economy.” It goes on to detail different policy approaches, ending with the emphatic line: “inaction is not an option.”

That’s what progress looks like, folks! (And h/t to super member Larry Linenschmidt for the heads up!)

Quote of the week: “The lens for us is risk management. There are researchers all through the Federal Reserve system who are thinking about the longer run implications of climate change for the economy, for financial institutions, and for all kinds of things,” Federal Reserve chairman Jerome Powell said.

Headscratcher of the week: “I’m very much into climate,” President Donald Trump said, one week after taking formal steps to withdraw the U.S. from the Paris Climate Accord, when asked about climate change at the Economic Club of New York.

Hand raisers: I love this photo of our guy Alex Bozmoski going back to where it all started for him: Georgetown University.

Makes you wonder what question he asked to get so many hands in the air.

Latergram: With Bob Inglis perpetually on the road with the EnCourage Tour, sometimes it’s hard to keep track of where he is. Especially when news stories about his events get published well after he’s left the stage, like this article in the Utah Statesman. At Utah State University (USU) in October, Bob presented to the College Republicans on campus. “Most of us have heard about [climate change] from a young age,” Augusta Scott, president of the USU College Republicans, said. “I think that’s the case for most students, especially ones that were here tonight, and it’s something they can talk about because its controversial at the moment.” Likewise, Dillon Passmore, vice president of the club, noted: “Around 70% of Americans consider climate change to be an issue, and I feel we [Republicans] at the very least need to engage the topic.”

And that’s a wrap. Here’s wishing you a wonderful weekend and wishing myself strength and speed! See you next week.