First snow falls on the DC region and newly elected lawmakers storm the hill for new member orientation. Plus a few other notables this week read on!

This week’s must read: In her essay, What the 6th District race can teach vulnerable Republicans on climate change, Chelsey Giesz from Young Evangelicals for Climate Action ponders what incentive lawmakers have to evolve on climate change if their efforts aren’t going to be rewarded at the polls. In regard to Rep. Peter Roskam’s loss last week, she wrote: “Some questioned us for engaging with former Rep. Roskam. They claimed he was simply using us for political cover in a tight re-election race. That he had no intentions of coming around on climate change and that, had he won re-election, he would have gone back to his previous positions of inaction and apathy. Maybe. But the implication of such a view is that no legislator without a blemishless environmental record could ever contribute anything positive to the climate solution conversation. No lawmakers are ever allowed to learn, to listen, to change their mind. This kind of ideological stridence spells disaster for our prospects of ever building a bipartisan movement toward durable climate policy solutions.”

This week’s must watch: Our friends at the Hoover Institution made this visual explanation carbon taxes in this 80-second video, Carbon Taxes: The Most Efficient Way to Reduce Emissions. “A carbon tax would automatically encourage consumers and producers to shift toward energy choices that emit less carbon, whatever those options may be, because they would cost less relative to high-carbon options.”

Full steam ahead: As recounted last week, Rep. Brian Fitzpatrick intends to take the climate reins from “irreplaceable” friend Rep. Carlos Curbelo. “I’m going to do whatever needs to be done,” he told Politico. “I’m going to stay with the fight. Somebody’s got to do it.” Likewise, Florida’s Democrat Rep. Ted Deutch, who with Curbelo co-founded the House Climate Solutions Caucus, said: “I continue to believe that Congress must consider all possibilities for addressing climate change, including carbon pricing and investments in alternative energy sources…I’ll continue to work with and find partners across the aisle to achieve bipartisan approaches to addressing climate change.” The Florida delegation remains strong, with Rep. Francis Rooney suggesting in the next Congress, the caucus “not be seen as an ‘in name only’ group, but actually work towards effective bipartisan solutions.”

“I want to make sure the caucus has the kind of teeth that people expect it to have,” Rooney said in the interview with the Washington Examiner.

Election update: Some House Climate Solutions Caucus races that were too close to call last week have been decided. Rep. Mimi Walters (CA-45) lost as did Rep. Tom McArthur (NJ-03). Neither made our lists previously because we had them in the win column. In Utah, Rep. Mia Love is gaining ground, but her race has not been called, nor has Rep. Claudia Tenney’s in New York.

CCL pushes lawmakers: Six hundred Citizens’ Climate Lobby (CCL) activists were in town this week to advocate for their carbon dividend plan, including several members of their Conservative Caucus. “We hope to find ways to continue to get Republicans to work to have this become a bridge issue and not a wedge issue in the House and Senate,” Jim Tolbert, ardent EcoRighter and CCL’s conservative caucus outreach director told the Washington Examiner. “”There are solutions out there that really don’t hurt the U.S. economy as a whole, and can even help the U.S. economy as a whole.” Read more about CCL’s lobby days here and while you’re at it, this National Review piece suggests what we’ve been saying all along: “Conservatives can accept the evidence [of climate change] while pushing for acceptable solutions.” Jim’s tweet:

The importance of ARPA-E: We can’t get there without technology. Our counterparts at Citizens for Responsible Energy Solutions sponsored this illustrative video on how Advanced Research Projects Agency-Energy (ARPA-E) allowed the development and adoption of technologies involving silicon carbide (SiC) power. “There’s always a tipping point. There’s a point where the technology becomes sufficiently inserted and all of a sudden expands broadly. And the purpose of ARPA-E is to push us forward to that tipping point.”

Gratitude: As we head into Thanksgiving, help us thank Mr. Curbelo (if you haven’t already) for his dedication to climate action. 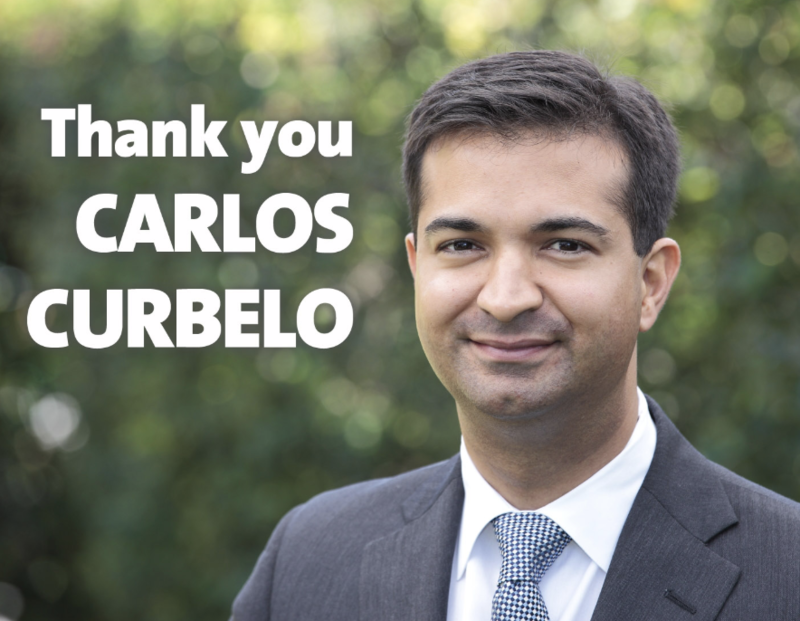