Happy Friday! Thanks for all the good wishes for the marathon. The results: due to poor race management, a bunch of us were redirected off course and yada yada yada, I only got 17 miles in before crossing the “finish” line. I took that as I sign I wasn’t meant to run 26.2 miles that particular night, but it was still hard to have someone else curtail my effort after all that training. Thank God I have the EcoRight (and the Gettysburg Marathon in April) to cheer me up.

??This week’s must read: Crossing Party Lines for Climate Action (UI Argonaut): Read about the bipartisan event featuring our own Rep. Bob Inglis and his friend from across the aisle, former Washington Rep. Brian Baird as they convened at the University of Idaho College of Law to discuss bipartisanship, climate action, and commonsense solutions. “Climate change is real and we must do something about it,” Bob said. “There’s a way to get there, and we think it’s through a carbon tax that’s revenue neutral.”

“We’re going to need an incentive like a carbon tax which will help drive and reward technology,” Baird said. “We’re going to need personal behavior change, international agreements, economic structures and we have to fund the hell out of innovation.”

From the article: “Baird and Inglis are old friends and share a history of working together in the house  Baird chaired the subcommittee on Energy and Environment, part of the Science and Technology committee, while Inglis served as the ranking republican. Inglis emphasized ‘coming together to find a solution.'”

??Gobble, gobble: Dreading climate conversation with a relative who doesn’t see eye-to-eye with you? Or planning to avoid discussion? You might not be alone: Climate talk isn’t on the Thanksgiving menu for most people (Morning Consult). With Thanksgiving fast approaching, we think about this conundrum at republicEn.org every holiday season. And we are here to help, if you need it. “While only about 1 in 5 adults expect to have a climate change discussion this holiday, 42 percent said in a new Morning Consult poll that they are now more likely to start a conversation with friends or family compared to a year ago,” this article reads. “And almost half of adults (48 percent) said they have started a conversation about the issue with friends or family in the past year, according to the Nov. 6-8 poll of 2,187 U.S. adults, which had a margin of error of 2 percentage points.”

And a quote from our guy Alex Bozmoski: “Alex Bozmoski, managing director of the George Mason-affiliated free market climate group RepublicEn.org, said he is “ecstatic” that 38 percent of GOP adults specifically reported starting these conversations. For people who have yet to see climate solutions that fit their worldview, it is a “bummer problem to talk about, because in a political context, it feels like capitulation,” Bozmoski said. “You need to have a solution set that you’d like before the issue really is something you want to discuss.”

If you do plan to talk about climate change at the dinner table and you aren’t sure what to say, drop us a line and we will offer some resources. And everyone should download Skeptical Science to their phones now. Just saying… 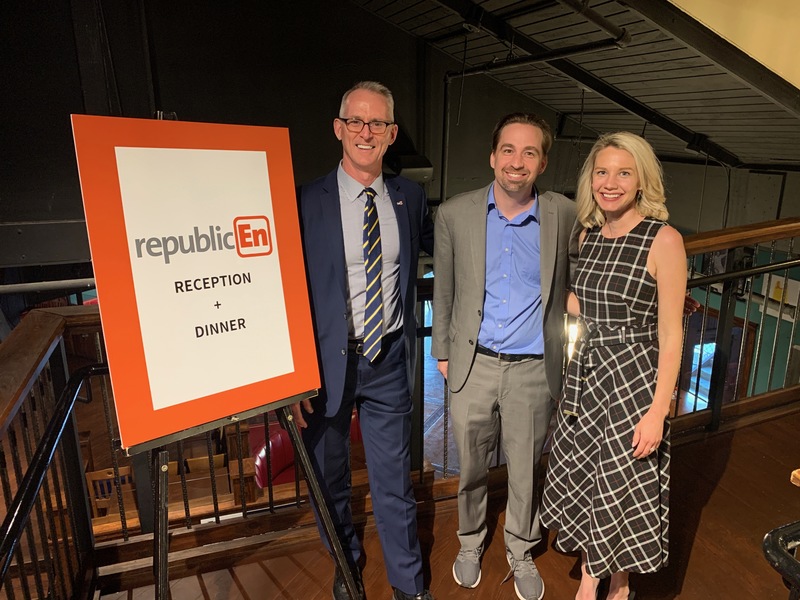 ??This week’s must watch: Bob is making the rounds deep in the heart of Texas (and from the pictures we’ve seen, having a ball doing it). Check out this video, Former Congressman Calls for Conservative Action on Climate Change, in which he recounts how he got into the climate arena (hint: thanks to his kids) and explains why GOP leadership is getting the message. And while we haven’t been fully debriefed on Bob’s tour of the Lone Star State, here is a teaser photo of him with EcoRighters Josiah Neeley from R Street Institute and Randan Steinhauser, our republicEn Texas advisor.

??Time for ideas: In this op-ed Republicans can’t exploit the left’s climate extremism without a better idea (The Hill) former Florida Rep. Carlos Curbelo writes that “Republicans would be right to assume that the left’s job-killing, price-raising, government-growing ‘solutions’ for climate change are out of step with the American mainstream. But they would be wrong to assume that it will be easy to exploit this vulnerability in the general election. Why? Because if Republicans are still ignoring climate change entirely, voters will see them as more extreme than Democrats.”

??Spotlight on Spokespeople: A little bit of a #latergram but our Jacob Abel was published in the Charlotte Observer with a letter to the editor in early November making the case for the U.S. to stay in the Paris Climate Accord.

??Giving thanks: Have you participated in our gratitude campaign? We selected a few key lawmakers to share the love with this Thanksgiving season. As Bob can attest to, even words of affirmation from people outside your district/state can make a different. If you want to give thanks to Senator Mike Braun, Rep. Brian Fitzpatrick, Rep. Matt Gaetz, Senator Mitt Romney, or Rep. Francis Rooney, click on the respective name (or do all of them).

From the bottom of republicEn.org hearts, we express gratitude to you, the EcoRight community. I personally thank every reader for taking the time each Friday to peruse this update. I’m honored and humbled.

Back at you in December!