Happy Friday from Northern California where the power is on (knock on wood) and the skies are clear. Also, how cute (and little) is my 102-year old grandmother? (For reference, I’m 5’4″ on a tall day…) 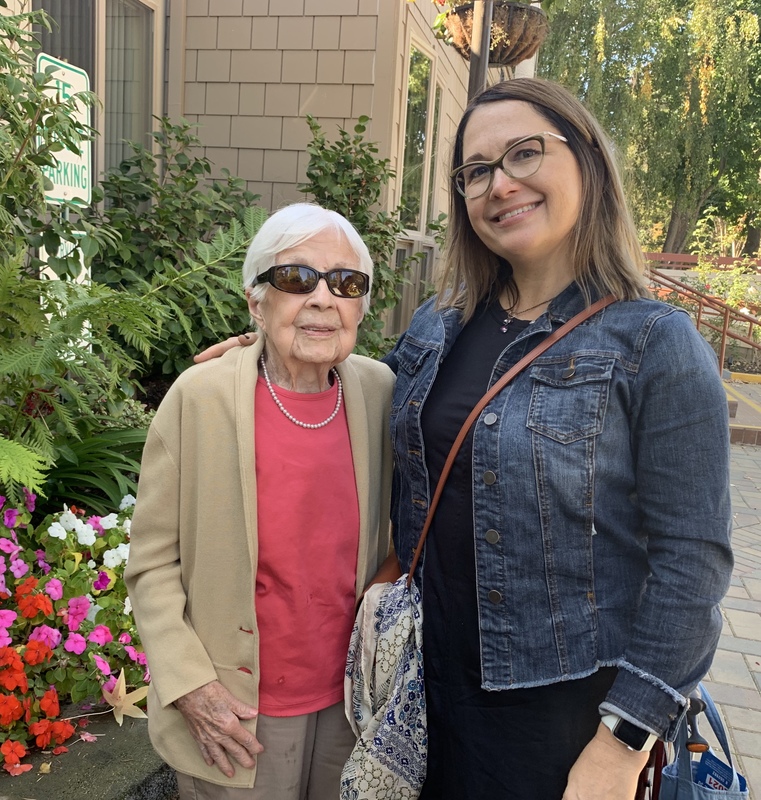 Hogan’s (climate) heroes: Maryland Governor Larry Hogan released a climate plan to reduce the state’s emissions of planet-warming gases 44 percent below 2006 levels by 2030. “The Hogan administration is committed to confronting the climate crisis through bold, collaborative, innovative, and bipartisan action,” said Ben Grumbles, the state’s Environment Secretary. The planwhich would also provide for the state’s continued participation in the Regional Greenhouse Gas Initiative known as RGGI (pronounced “Reggie”), increase investment in clean energy sources, and incentivize healthy soil practices for farmersis now subject to a public comment period. “We are confident that Maryland will continue to be a shining example of bipartisan energy and environmental progress at a time when it’s needed most,” Grumbles wrote in an op-ed last week.

Spotlight on spokespeople: While Bob Inglis was the star of the show, our recent event at Syracuse University with their College Republicans chapter wouldn’t have happened without the hard work of our passionate EcoRight spokesperson Ben Mutolo, featured in this Daily Orange article. “The politicians my family voted for kept telling me not to worry about the change, it’s nothing,” Ben said. “But it became hard to ignore when the well that supplies all the water to my house dried in July, so my family was without water supply for several weeks.”

Bob told the audience of 40 that “we might just bring Americans together to make a solution to climate change, but that can’t happen without conservatives. Conservatives are the most important people on the planet right now when it comes to fixing climate change. The left has gone as far as they can go.” 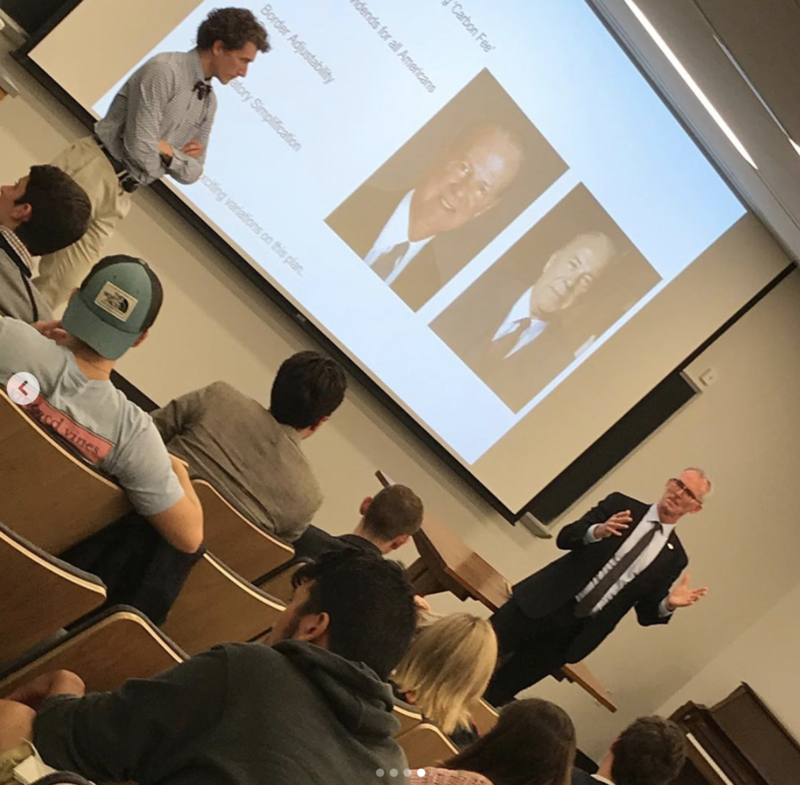 Insurance policy: Former Secretary of State George Shultz, who together with another former cabinet member, James A. Baker, conceived of the cap and dividend plan, reflected about the role he played in late President Ronald Reagan’s epiphany on the ozone crisis. “I had two private meetings a week with President Reagan,” Shultz recounted. “We talked about it. He became convinced that it was a real big problem.” Ultimately, the Montreal Protocol was born. Long considered the most successful international treaty on the environment, the global agreement dealt with the phase out of harmful chlorofluorocarbons, which were creating the hole in the ozone. Reagan “went to the scientists,” according to Shultz “and said, ‘We respect you, but you do agree that if it happens it’s a catastrophe, so let’s take out an insurance policy.'”

Likewise, Shultz views the cap and dividend approach in a similar light: “I think that it’s obvious, first of all, that there is a deep problem, and it has severe consequences going forward. And with all due respect to the science, which I appreciate, you don’t have to rely on science. All you have to do is use your eyes. There is a new ocean being created in the Arctic. Why? The ice mass over Greenland is melting fast. Why? The Great Barrier Reef and other reefs in the Caribbean are all deteriorating. Why? And the answer is always the same. There is no question, no question, that the earth is warming, and there’s no question that there are consequences.”

Those with some time on their hands can check out the hour long conversation between Shultz and Stanford University’s director of the Precourt Institute for Energy.

Sunshine State makes waves: You’ve read about the efforts of former and current members of the Florida delegation (think Curbelo, Ros-Lehtinen, Rooney, and Gaetz). Newly elected Governor Ron DeSantis made news when he appointed the state’s first ever Chief Science Officer and Chief Resilience Officer. Now, for the first time in over a decade, a Florida State Senate Committee held a hearing to discuss the impact climate change is having on the state. “We lost a decade,” said Sen. Tom Lee, the Republican who chairs the Committee on Infrastructure and Security. He noted the “a paradigm shift” on talking about climate change that occurred with the election of DeSantis, while also acknowledging “there’s a younger generation of conservatives in this state that aren’t as much in denial.” Julia Nesheiwat, the aforementioned chief resilience officer, told committee members her job is building a statewide strategy over the next couple of years that prepares Florida for the economic, physical and environmental impacts of climate change. “These aren’t issues that are just 10, 20 years, it’s happening now, we’re seeing it now as we speak.” She called climate change “a very dire and urgent issue that I think we need to address.” ??????

“The world is changing and so is the leadership in state government,” Lee said. “What we can do in this environment? I don’t know. But we have got to push that envelope.” 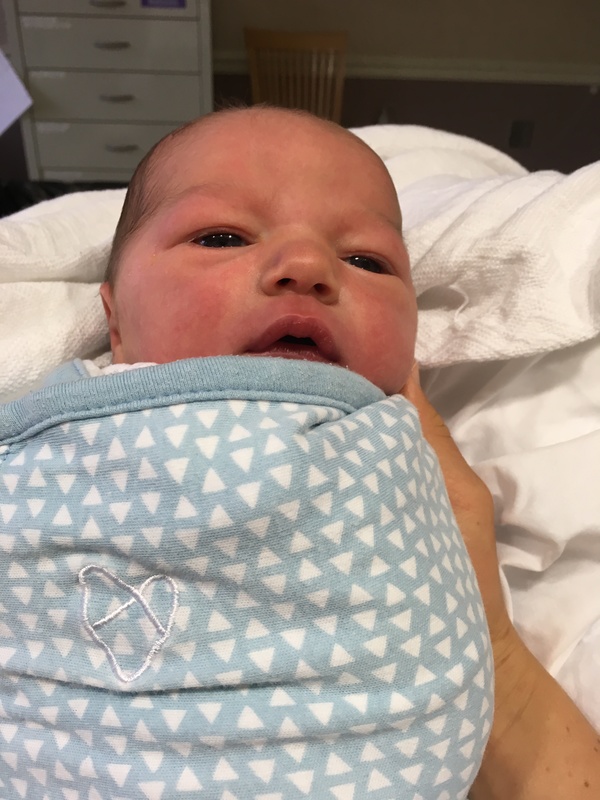 Welcome to the newest EcoRighter: Speaking of changing worlds, Bob is a grandfather for the first time. Peter Inglis Blessing arrived this week. He likes carbon taxes and late night feedings. Congratulations to Bob and his family!

Climate jester: Acting White House Chief of Staff Mick Mulvaney told reporters Thursday that “climate change will not be on the agenda” at next year’s G-7 Summit, which will be hosted at Trump National Doral Miami resort. #HeavySigh

That’s it for me, friends. Keep it real!