Happy Friday! My cat just looked me in the eye and pushed a full glass of water to the floor, but the Red Sox are going to the World Series, so there is balance in my life. On to the real news…

This week’s must read: In North Carolina, hurricanes did what scientists could not: convince Republicans climate change is real (Washington Post) “I always thought climate change was a bunch of nonsense, but now I really do think it is happening.”

Plus, a shout out to our friend Joseph Majkut at Niskanen Center for this: Carbon taxes are finally poised to become a reality (The Hill) We especially love the last line: “Rather than relying on the tools of the past, new approachesand new bedfellowswill be essential to achieving environmental reforms going forward.”

Pretty dire: Appearing on the ABC Sunday show This Week, Arizona Senator Jeff Flake called last week’s sweeping climate change report by the IPCC “pretty dire.” When asked whether Republicans are moving in the wrong direction on the issue, Flake said “I think so,” adding, “I hope that we can move along with the rest of the world and address this.”

Sen. Jeff Flake says Republicans need to take action on climate change: “There are things that we can do and should do and I think Republicans need to be at the forefront if we want to keep our place and keep our seats” https://t.co/xu9DfBgxNZ #ThisWeek pic.twitter.com/7chrfc6sMT
 This Week (@ThisWeekABC) October 14, 2018

Flake, who was a co-sponsor of Bob Inglis’s carbon tax bill in 2009, is retiring at the end of this Congressional session. 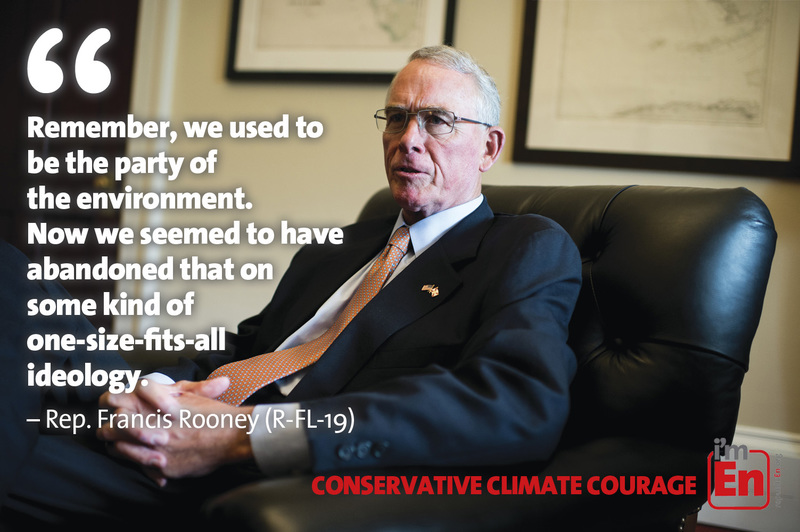 “The more we can publicize the reality of sea level rise and the risk to a lot of places that are low, maybe some of those people will realize that you can be a plenty good conservative Republican on border security, on foreign affairs, on taxes, on business, and still care about the environment and whether you are going to get flooded,” Rooney said in an interview with the Washington Examiner. “Our sea level challenges will be really serious along our coast, with how many people who live along our coast. If we are going to have more powerful storms, and we are going to suffer more rain events in these low areas, does it make sense spending all this money for floods when you could have remediated it in the first place? Why spend all this money on these repetitive loss properties every time there is a hurricane. It’s kind of ridiculous isn’t it? An ounce of prevention is better than a pound of cure.”

“Human beings are affecting the environment in an adverse way … if we do not take care of our environment, it’s going to hurt our economy.” @RepCurbelo talks Climate Change with @PoppyHarlowCNN https://t.co/RSPQiP0D0Z pic.twitter.com/kS04rK9LFy
 CNN Newsroom (@CNNnewsroom) October 16, 2018

Likewise, Curbelo, appearing on CNN, noted “human beings are affecting the environment in an adverse way… if we do not take care of our environment, it’s going to hurt our economy.” The South Florida economy relies on tourism, fisheries, recreational boats and other related industries impacted by sea level rise. His message to all lawmakers: “Accept the science. It’s real. Let’s start focusing on the solutions that we need. And by the way, if we’re going to get any solutions we need Republicans and Democrats working together.”

Mayors rock: “As a proud Republican, I believe that taking a strong, decisive approach to tackling climate change is consistent with my conservative background. Preserving what we have so that we can pass it on to our children and grandchildren is a concept at the very heart of conservatism,” R. Rex Parris writes in the Bombala Times. As Mayor of Lancaster, California, “a politically conservative, predominantly Republican community,” Parris set an example of “how municipalities can take local control and blaze a trail toward sustainability.” From requiring solar for all new houses to setting the stage to become the first public transit agency in the country with an all electric bus fleet, the city set its sights on “becoming a global leader in alternative energy” while in the process creating jobs, driving investment and growth, and “driving down unemployment ratesas well as greenhouse gas pollution.”

“The clock is ticking,” he writes. “Climate change is here. The science is irrefutable, and we’re already feeling its effects. If we don’t take action to increase renewable energy and reduce our emissions now, we will miss the window of opportunity to halt escalating global temperatures. This is no time to play politics. Political party affiliation shouldn’t determine whether we are for or against combating climate change. Officials in all levels of government worldwide must put ideology aside and commit to policy that drives down energy and transport emissions.”

Climate jesters of the week: For sticking to old talking points and not opening up to talk about solutions, it was a three-way tie for this week’s jester.

(Apparently, Rubio needs a heart-to-heart with Curbelo and Rooney.)

That’s it for me. Whether you’re carving pumpkins, watching baseball, wrapping up in your favorite sweater, or like me, doing all three, have a wonderful weekend.