Happy October! As you’ll read below, Team EcoRight made some strong and compelling moves this week, all of which we applaud.

#latergram: Wheaton students advocate for the environment alongside Congressman Roskam (The Wheaton Record) Wheaton College’s school paper recaps last week’s field trip with Rep. Peter Roskam. “Let’s live on the edge!” Roskam declared as the crew of students, professors and EcoRighters set off for their hike.

She’s back! Katharine Hayhoe returns with season three of Global Weirding. The latest episode tackles the difference between weather and climate, a useful primer.

“Can you believe that warmer temperatures can actually increase the amount of snow that falls sometimes?” Find out how and why by watching her engaging explanation. You might snag some nuggets to share with your hoaxer uncle at Thanksgiving next month.

Rooney makes 90:The House Climate Solutions Caucus hit 90 members with the addition of Florida’s Rep. Francis Rooney on the Republican side and Democrat Rep. Ro Khanna from California. Florida already was the most represented state on the caucus, founded by two of its delegation members, Rep. Carlos Curbleo and Rep. Ted Deutch.

“I joined the Climate Solutions Caucus because environmental issues are critical for our Southwest Florida community,” Rooney said in a statement. “Southwest Florida’s well-being depends on a healthy environment; one just needs to look at the algal blooms currently ravaging our community to understand the negative effects of environmental disasters. To safeguard our future, proactive planning is necessary to mitigate effects of rising sea levels and increased intensity of flooding. I look forward to working with a bipartisan group of my colleagues on solving the problems of sea-level rise.”

His delegation mates welcomed him to the fold with open arms.

Congratulations to my #Florida colleague @RepRooney and his counterpart @RepRoKhanna for joining the bipartisan #ClimateSolutionsCaucus. Together we will continue to broaden the dialogue on #ClimateChange to reduce emissions and protect our coastal communities. https://t.co/ga5efi658c
 Rep. Carlos Curbelo (@RepCurbelo) October 2, 2018

Rooney is also a co-sponsor of Curbelo’s MARKET Choice Act, the first carbon tax bill introduced by a Republican member since 2010. He also voted against Rep. Steve Scalise’s anti-carbon tax resolution, only one of six Republicans to do so. 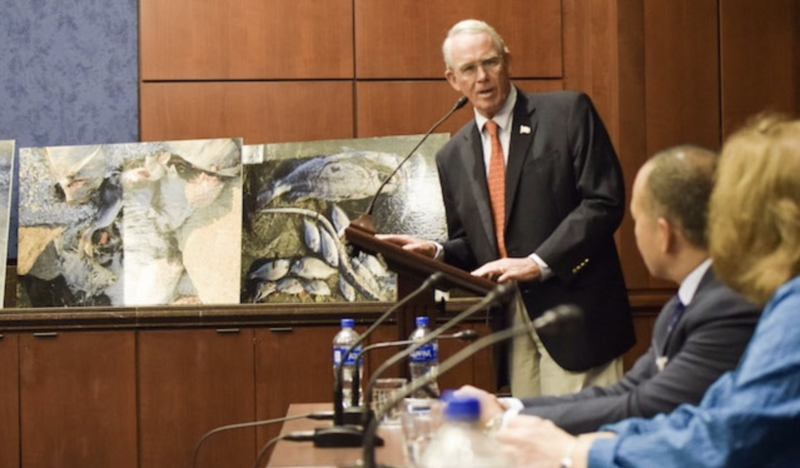 Stop denying, start doing: Former New Jersey Gov. Christine Todd Whitman, who served as President George W. Bush’s first EPA Administrator, said in an op-ed that Republicans need to “do something” about climate change and that “it’s time to hold the Republican party to higher standard.”

“Because climate change has become needlessly partisan, I am always heartened when a fellow Republican recognizes the seriousness of the issue. More elected Republicans are now publicly acknowledging the truth: climate change is real and humans are the leading cause of it,” she wrote while also criticizing those who recently voted for Rep. Steve Scalise’s anti-carbon tax resolution without offering “suggestions of their own” on how to deal with climate change. “Republicans can stand for a clean environment and market principles. But we can’t stand on the sidelines. We must enter this debate with our own ideas, and push for policies that cut the pollution intensifying havoc across our country and world. And token cuts are not enough, we must reduce emissions and move toward clean energy as fast as the science of climate change demands.”

Insurance policy: Former Secretary of State George Shultz, veteran of President Ronald Reagan’s administration and recent advocate of a cap and dividend plan to address climate change, spoke at the Fiduciary Investors Symposium at Stanford University where he extolled the carbon tax. “It works,” he said. “Companies whose names you would recognize have signed up for a revenue-neutral carbon tax…More companies see it as better than the regulatory hand.” He also praised how the marketplace has boosted clean energy, spurring technology and lowering costs. “I’ve had solar panels on my house for 10 years and have long-since paid for them from money saved,” he said. “And they produce more electricity than my electric car uses, so the cost of my fuel is zero. What’s not to like?” He also reminisced about Reagan’s effort to address the hole in the ozone, which led to the successful Montreal Protocol. “Reagan put his arm around the disbelievers,” he said, without “demolishing” those opponents. Shultz is the co-author of the Conservative Case for Carbon Dividends.

Funny of the week: I woke up the other morning to this screenshot of an alert our team member Price Atkinson had received: 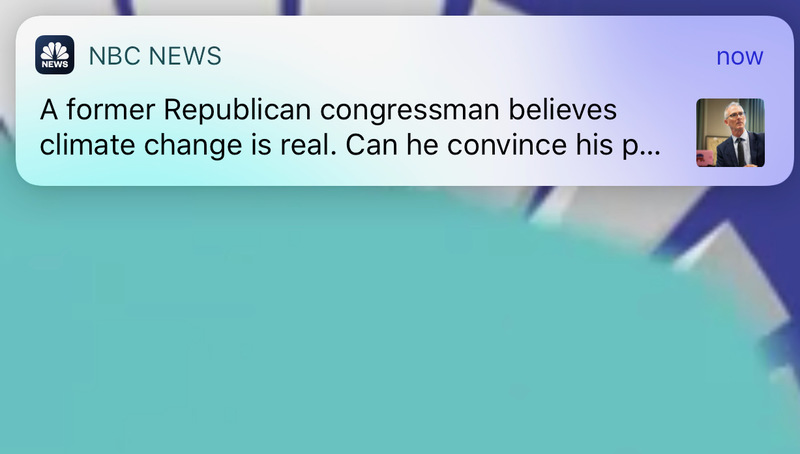 Not really breaking for us, but we are always happy to see Bob Inglis in the news.

That’s it for me. Whether you have a three-day weekend or not, don’t forget self-care and compassion for all!