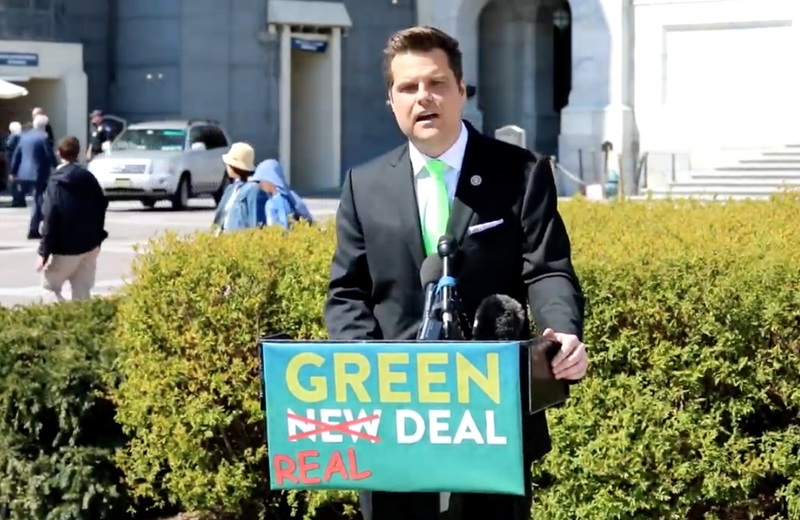 “History will judge harshly my Republican colleagues who deny the science of climate change,” Gaetz said at a press conference. “Similarly, those Democrats who would use climate change as a basis to regulate out of existence the American experiene the harsh reality that their ideas will fail.”

.@MattGaetz: “History will judge harshly my Republican colleagues who deny the science of climate change. Similarly those Democrats who would use climate change as a basis to regulate out of existence the American experience will face the harsh reality that their ideas will fail” pic.twitter.com/9acjNRNld2
 The Hill (@thehill) April 3, 2019

Gatez calls his resolution “a love letter to the American innovator” as well as “a common sense rebuttal to the Green New Deal” conceived originally by Rep. Alexandria Ocasio-Cortez from New York. Florida delegation mate and fellow conservative Rep. Francis Rooney is his sole co-sponsor. Rooney has a carbon pricing bill and also co-chairs the House Climate Solutions Caucus. Former Florida Rep. Carlos Curbelo told the Washington Examiner that “Gaetz engaging [on] the issue is significant and while perhaps counterintuitive at first glance, perfectly natural given that he’s a bright millennial legislator. He can be an extremely positive and decisive influence in the House GOP conference on this issue.”

“Congressman Gaetz deserves to be applauded for taking the lead in crafting a bold resolution that identifies actionable climate solutions that will benefit America’s economy, environment, and national security,” said Heather Reams, executive director of Citizens for Responsible Energy Solutions. Her full statement can be found here.

An opinion piece by Gaetz ran in Real Clear Politics earlier. In It’s time for a Green Real Deal, Gaetz writes: “I wish climate change wasn’t real. A melting Arctic creates a more permissive environment for Russia and China to seize territory. Mass migrations of climate refugees erode borders and nations, creating a global playground for terrorists and traffickers. My Florida neighbors are still rebuilding their lives after devastating hurricanes. The reality of climate change is a stupid thing to argue about. How we respond, however, hasn’t been afforded enough debate.”