Over the next few months, we will feature profiles on select members of the House Climate Solutions Caucus, the bipartisan, growing gang of Congressional leaders who embrace climate action. 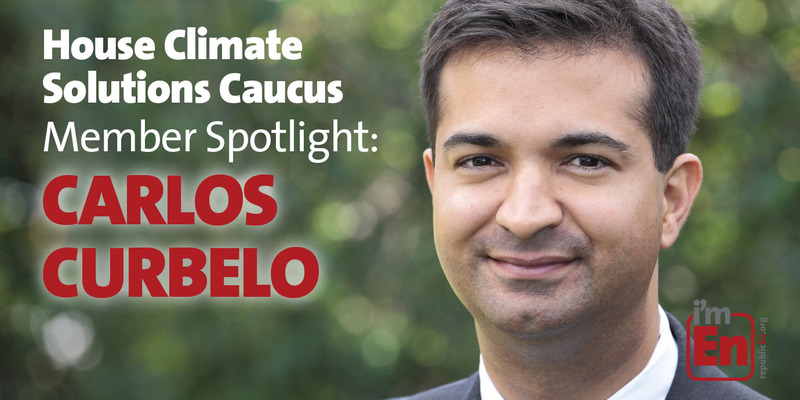 Rep. Carlos Curbelo needs no introduction on these pages. The Florida Congressman representing a climate vulnerable district in South Florida has emerged as a leader in the Republican party and frequently earns our praise for courageous climate action. He and delegation mate Rep. Ted Deutch co-founded the caucus, which adheres to a “Noah’s Ark” rule; every Democrat who joins must pair with a new Republican and vice versa. At post time, the total caucus membership numbered 78, nearly 20 percent of the entire Congressional chamber.

Curbelo hasn’t been afraid to stand up for the need for climate action. “It’s a local issue for me,” he said in an interview with Yale Environment 360. “The environment is front and center in South Florida, it’s an economic issue for our community. People from all over the world come to South Florida, specifically to my district, to enjoy our natural treasures: Everglade National Park, Dry Tortugas National Park, Biscayne National Park, Florida Bay, the National Marine Sanctuary. It’s also a moral issue for me. We need to be good stewards of the environment. We know that human activities, specifically carbon emissions, are contributing to rising global temperatures, rising sea levels, and we just need to find a way forward that embraces clean energy and secures the future.”

Whereas a number of lawmakers look the other way on the overwhelming science of climate change, Curbelo never denied the science or defaulted to lame excuses (you know the ones). “I was not engaged in the past as I am now. It’s an issue where the more I learned about it, the more I was moved to action.” He cites the desire to spark a conversation as a driving factor in the creation of the caucus. “The number one goal was to get Republicans and Democrats together to have a conversation about climate change, a sober conversation, based on the facts, based on the evidence. We brought in climate policy leaders from foreign countries, energy company executives, environmental organization leaders, and we listened. Then we spoke among ourselves, built trust, and that was the first phase of the caucus. And that was a success,” he said. “And now we are in what I consider the second phase of the caucus, which is the blocking and tackling phase where we try to take on anti-climate legislation and defeat it on the House floor, which we’ve done a couple times.”

In the future, he hopes to see the caucus evolve into an “ideas factory” and with those 78 members (and counting) in its ranks, perhaps an environmental voting block.

RepublicEn.org likes that Curbelo doesn’t back down, from rallying climate troops to taking on President Trump via Twitter.

If this isn’t a joke it should be. Average global temperatures are rising; so are sea levels. That’s not good for S. FL. It was a mistake to leave the #ParisAgreement & it’s misleading to cite the temperature on any given day to dismiss dangerous risks posed by CO2 emissions. https://t.co/N9gp545Tea

He’s young. He’s scrappy. And we hope he’s around for years to come.