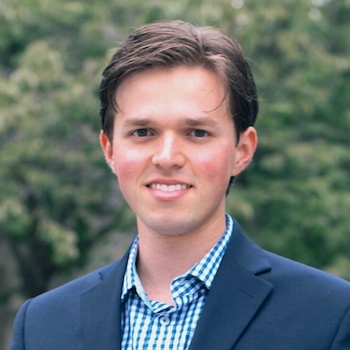 Alex Posner is a republicEn member and the President of Students for Carbon Dividends, a group promoting the carbon fee and dividend framework among young conservatives. Originally from New York, Alex is a recent Yale graduate with a degree in American History. At just 23 years old, Alex has already emerged as a prominent EcoRight leader, appearing on media outlets such as Fox News.

When and why did you first start caring about climate change?
I first learned about climate instability in high school and then became much more invested in college. My sophomore year I took a course on energy economics, which opened my eyes to the inherent wisdom (and conservative merits) of carbon pricing. I am very grateful for that experience as it helped inspire me to become a part of this important movement.

What would you say to Republicans who still deny climate change is a problem?
I would say that climate instability is a risk management problem, and that there is a very strong case for acting even in the face of uncertain science. If the worst climate predictions turn out to be true, we are in deep trouble. As Republican Treasury Secretary Hank Paulson put it, doing nothing in the face of climate instability is “radical risk-taking.” So the responsible and conservative thing to do in this case would be to take out an insurance policy, and that’s precisely what a carbon dividends plan would accomplish.

Are you confident in America’s ability to fight climate change using market solutions?
Yes, very confident. American innovation and ingenuitywhich carbon pricing would unleashhas enabled the United States to accomplish remarkable things throughout history. We’ve done it before, and we can do it again.

What about this movement makes you feel optimistic for the future?
I’m buoyed by the incredible leadership from young conservatives on this issue. There is a generational divide on this topicafter all, young people have the most at stakethat is already shifting the political needle. For the GOP to be the party of the future, it needs a plan to protect the future and that appeals to voters of the future.

What could the GOP do or say to make climate action more appealing to the public? What needs to change within the party?
I think many people view climate policy and economic growth as incompatible, when in fact they can go hand-in-hand. It is time for the GOP to fully champion this message, and make an affirmative case for the importance of climate action and the power of free-market solutions.

What worries you most about climate change?
As a young person with many decades of life ahead, I worry about the enormous impact the climate threat will have on the economy. Climate policy is often framed in solely altruistic terms (e.g. please save the planet or sacrifice on behalf of the polar bears), but in reality humans could be among the hardest hit. Our way of life could be seriously impacted if we fail to act, that’s why I’m honored to be part of this movement. It is up to us to safeguard American freedom and prosperity.