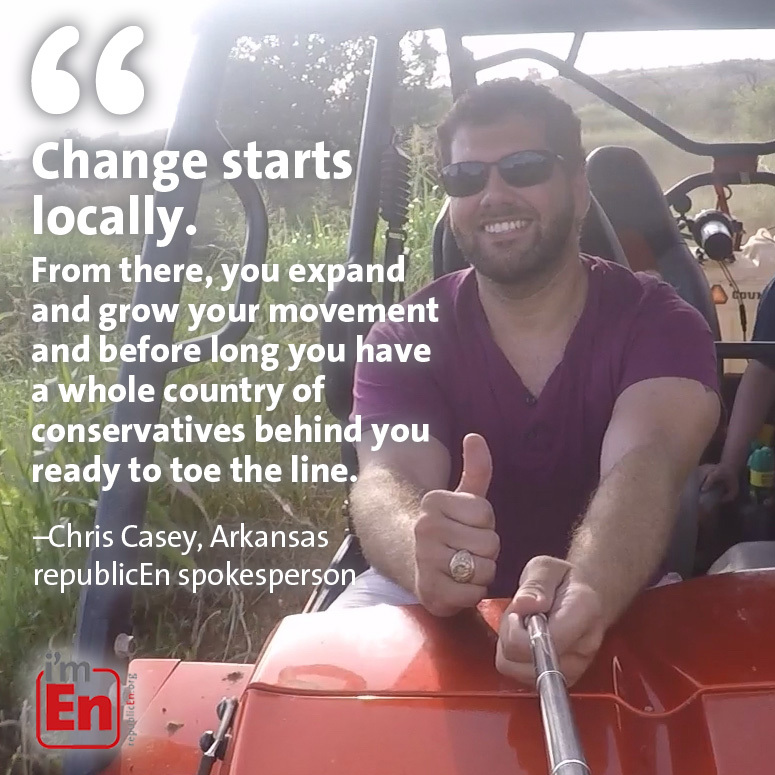 Chris Casey has been on fire since joining the ranks of the republicEn.org Spokesperson team, with an op-ed Informed, not brainwashed published in May in the Texas Tribune (later republished in the Fort Worth Star-Telegram) and last week, a letter to the editor in the Houston Chronicle. He’s active on social media (find him on Twitter at @CCasey_3) and we know he’s got more up his sleeve. This U.S. Army veteran grew up in the panhandle of Texas, where he witnessed the devastating effects that historical droughts have brought over the last eight years. From restricted water usage to bad crop seasons, Chris has seen the impact climate change can have on small farming communities. We caught up with (to!) Chris to ask a few questions.

What inspires you most about the EcoRight? It’s really inspiring to me to see the increasing rate of conservatives, especially younger conservatives, who are taking action to be stewards of the environment. My generation cares about climate because, as I wrote in the Texas Tribune piece, we are likely to inherit a crippling environmental debt caused by climate inaction.

How can the EcoRight build its ranks? So many conservative climate interest groups are popping up, it’s fantastic. From the increasing membership at republicEn.org to the recently launched Students for Carbon Dividends and Americans for Carbon Dividends. We can inspire more by encouraging people to engage with their locally elected officials. Change starts locally. From there, you expand and grow your movement and before long you have a whole country of conservatives behind you ready to make change.

What gives you hope that the EcoRight will succeed with its mission to see a carbon tax or dividend? Again, I point to the young conservatives who are doing phenomenal work and getting our elected leaders to listen and actually implement steps to work toward a carbon tax, which will benefit not only them but generations to come.