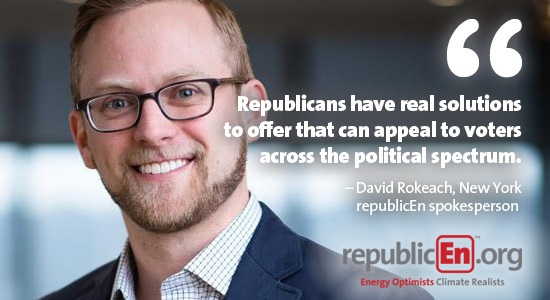 Last week, republicEn.org spokesperson and active EcoRighter David Rokeach had this insightful op-ed published in the Albany Times Union (and he’s co-author with Kelsi Wolever of #Dare2Ask fame on one we hope to see in print soon). David has been a member of our community almost since its inception, and we are thrilled to have his voice, passion and experience on our team. We asked him a few questions…

Why do you think the New York delegation has the most GOP members of the House Climate Solutions Caucus?

New York is an interesting state, politically. While generally perceived to be solid blue due to the dominance of urban centers in national elections, you actually have a pretty wide range of political views once you start heading upstate. Even in more conservative areas, pragmatic conservatism comprises the base, which oftenthough not always breeds conservative lawmakers willing to listen and engage on tough issues rather than retreating to the red-meat-base. Climate is a great example. Upstate New Yorkers certainly aren’t at the front line of facing the impact of climate change, like our friends in New York City and New Jersey who have already seen the beginnings of it with Hurricane Sandy. However, there’s a keen sense that we as a society must deal with this together, and it brings young visionaries like Rep. Elise Stefanik to the forefront to offer fresh perspectives in the debate.

How do you push back against those who say you can’t be conservative and support climate action?

There is absolutely no dissonance between conservatism and conservation  just look at the etymology. To be conservative means you want to preserve the best of today’s world for future generations. Is there a more compelling cause than passing on a healthy and thriving environment to our kids and grandkids? We as a movement should be leading on climate change and other environmental issues, not fighting them. What bothers me the most is the assumption that climate changeas an issueis a political one. There should be nothing political about recognizing that a trend is occurring. Politics should come in when talking about what, if anything, we should do about it. I’m happy to engage with anyone on the policy  even if you say it’s too late or not economically justifiable to combat climate change. But don’t try to tell me it’s not happening or not caused by humans.

However, we must acknowledge that it is incredibly difficult to be a conservative who publicly supports climate action if your job depends on you avoiding it. I know from my time working as an energy and environmental policy adviser in Congress that there are plenty of lawmakersand even more staffwho know this is an issue that we should be dealing with. But it is very, very hard to buck your district. The solution to this problem is twofold: 1) we need more leaders like Bob Inglis out there creating a political environment at the grassroots level where it’s safe for current lawmakers to dip their toes in the water, and 2) we need those lawmakers to suck it up, be bold, and lead.

Why are millennials the group that’s taking the stand on climate change?

Easy  we’re the ones that are going to have to pay for the mistakes of our parents and grandparents. They’ll be long gone by the time the soil dries up, the shores erode, and the storms come. It’s us, and our younger friends in Generation Z, who will have to spend inordinate sums on last minute adaptation measures and disaster response, not to mention the skyrocketing national debt our aging leadership has so graciously bestowed upon us. It’s time millennials articulate this issue as a generational one. Every successful cause has a cohesive group tagged to it. Pro-choice activists have women; supporters of untouched Social Security have retired people; SNAP advocates have low-income families. Climate change, on the other hand, has such diffuse impacts across the population that no one group or region stands to suffer  except younger generations. It’s up to us to take on climate as a cohesive group, and demand change now.