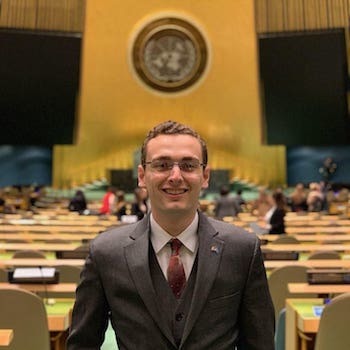 Jacob Abel is a senior studying International Relations at Seton Hall University. Although he originally hails from Huntington Beach, California, he has lived in Concord, North Carolina for 12 years. He is a spokesperson for republicEn and a member of the Conservative Caucus in Citizens’ Climate Lobby.

How well do you feel your conservative values mesh with climate action?
Conservation goes hand-in-hand with conservatism. In my experience, most people genuinely want to take care of the environment and want to use our resources in moderation and responsibly. Conservatives by their nature don’t want to be wasteful and this lends well to taking action on climate.

What is the biggest challenge you’ve faced with being a member of the EcoRight?
I think the biggest challenge I faced was putting myself and my opinion out there for the first time. I had previously never really been that involved with politics or advocacy, so this was difficult at first. Also, getting involved in such a polarized time and in a time when the Republican Party has really gone through a shift in ideology has also made it challenging.

What would you say to Republicans who still deny climate change is a problem?
I talk about the benefits of a carbon tax in relation to the negative externalities that exist with the use of fossil fuels, such as the cost of pollution and higher medical expenses. I bring up the market trends that are already pushing various industries toward cleaner energy such as Ford investing $500 million in electric vehicle research. I think examples like this show a perspective that not many people often think about. It also puts a real dollar value on the cost of continuing to maintain the status quo.

“Conservatives by their nature don’t want to be wasteful and this lends well to taking action on climate.”

What could the GOP do to make climate action more appealing to the public? What needs to change within the party?
I think the answer to both questions is to accept the problem. From there we can then move into a debate about policy, which I know we can own as a party. Unfortunately, the issue of climate change has been made so toxic both by the rhetoric of those on the left and by our own party that it makes having a conversation about climate change very difficult.

What about this movement makes you feel optimistic for the future?
More and more people are getting involved. Polling shows that climate change is a very important issue for many young conservatives, and the more people talking about this issue the better. I always like to say that if we aren’t at the table talking about solutions, then we can’t be mad if we feel the solutions being proposed are too radical. Along that point, we are also starting to hear a more enriched debate around the solutions, not so much debate over the science. This is especially true among young people, regardless of political background.