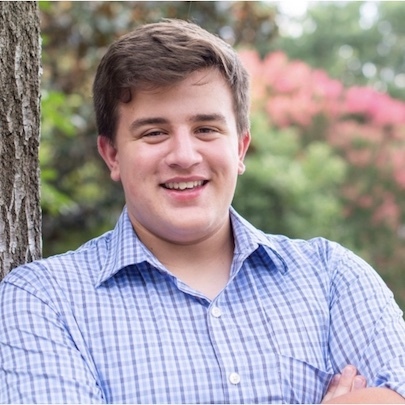 JC Leser is from Raleigh, North Carolina, and is a senior at Raleigh Charter High School. He will be attending UNC-Chapel Hill in the fall of 2020. While in high school, he was captain of the mock trial team and frequent guest speaker at the Young Republicans Club. After attending Tar Heel Boys’ State in 2019, he became more active in environmental issues, becoming a County Youth Chair for republicEn.

When and why did you first start caring about climate change?
I was a junior in high school and I was taking AP Environmental Science. I saw the destruction we were bringing upon ourselves, and it hit methis is an issue that we need to take seriously. I was afraid for the world I would see when I was old. I was afraid for the world that I would leave my children and grandchildren. I decided that I wanted to make the world better than it was left to me, not only for myself, but for future generations.

What worries you most about climate change?
What worries me the most is that climate change has the potential to cause unheard of loss of life. Famines, rising sea levels, and changing temperature could all cause heavy losses and would be devastating to millions of people in the future.

What is the biggest challenge you’ve faced with being a member of the EcoRight?
The biggest challenge is attempting to explain to liberals concerned about climate change that I am generally on their side. The people that have a more liberal point of view who I’ve talked to about climate change still see me as an enemy because I don’t share their exact views on how to solve it.

What would you say to Republicans who deny climate change is a problem?
I would say that they need to focus on the future. Even if it turns out that climate change is not a life threatening issue  which I contend it is  there is no harm in making the earth a better place. There is no harm, especially if there is a market incentive to be more environmentally friendly.

Are you confident in America’s ability to address climate change using market solutions?
I am very confident in America’s ability to fight climate change using the market. America is fueled by the economy, and once there is a financial incentive to reduce climate pollution, the right thing will be done. Even though many people despise it, money is king. Making it worthwhile for an individual, a small business, and a corporation to combat climate change is most likely the way that will work the best.

What about the EcoRight movement makes you feel optimistic for the future?
The fact that more and more people are coming to see the truth on climate change makes me optimistic that some actual progress may be made to combat the changing climate. Conservatives have a bad reputation when it comes to climate change, and seeing some prominent conservatives join the EcoRight gives me hope that a solution may come.