Sometimes our republicEn members take actions that are so outstanding, we’ve got to share it with the community.

A few days later, Rep. Loudermilk sent Stephen the reply below. An excerpt: “I am concerned that a carbon tax is yet another attempt to grow the government, which would result in private sector job losses and more tax burdens on hardworking Americans… Instead, I believe that private sector businesses are in the best position to take the lead in exploring alternative energy options, so we can protect the environment and allow Americans to keep more of their hard-earned money in their pockets.” Read the full letter by clicking on the image below: 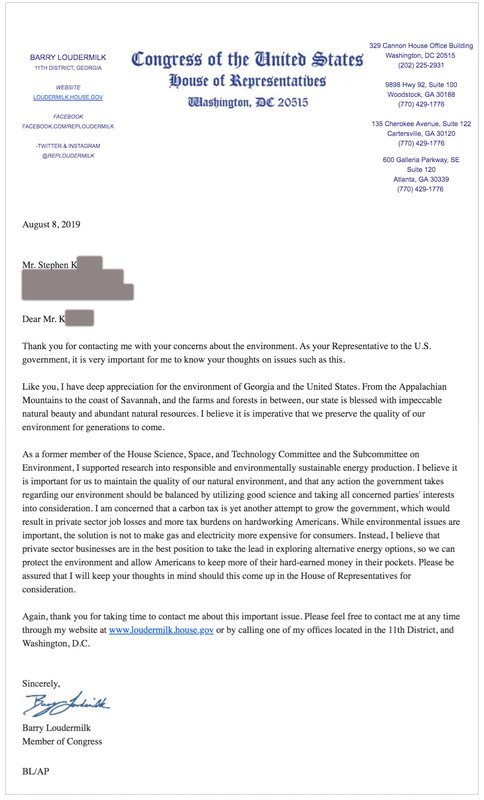 In response, Stephen wrote back to Rep. Loudermilk with the following letter. And we love it!

Thank you for your response.

With the greatest respect, Congressman, you only have it half right.

You are right that only the private sector can come up with the innovations that will lead to viable solutions.

You are wrong in that the best carbon taxes are wholly neutral, that is they return to all citizens a per head share of the tax revenue, with nothing going to create additional government programs. That is the only way it all works.

I’ve been a Republican / conservative / right-to-lifer all of my life (and I’m soon to become 60). Your kick-the-can-down-the-road approach, with vague eco-niceties is an abdication of your responsibility to help this generation leave to future generations the blessings that we, ourselves, have enjoyed. You must be blind to not see what we are passing forward. Record heat. Record storms. Record cold snaps. Destruction of ecosystems from the algae in the Gulf and on Florida’s shores to the bleaching of coral reefs around the world. We see increasing patches of the oceans that are wholly dead. Polar ice is going away. Permafrost, some of which is hundreds of thousands of years old, is melting and releasing methane. Seas will be rising with increasing speed.

The Republican representative from Florida supporting the bill is no less a conservative than you are  but, his fellow Floridians feel these threats up close and personally. That is why he supports this and you don’t. The EcoRight exists, and is growing. Perhaps we are all crazy. Perhaps climate change is just a contrivance by scientists… The dead zones in the Gulf, or the dead fish washing up like waves on shores…. we must not really be seeing this. It must be fake news. But, I won’t bet my grandchild’s future on that position. Nor should you. Conservatism includes stewardship.

The generation behind us will not be able to avoid the cliff in front of it. And, they don’t understand how rotten to the core socialism is. Centralized solutions will not work. Only the market offers the incentives in the right places to put entrepreneurial know-how to work where it will do the most good, and leave in place traditional energy where it is relatively more efficient. There are solutions. But, like with the space program and its impact on electronics, or the post office and its impact on supporting the development of transcontinental railroads, facilitation by the government will accelerate the much needed progress.

Again, you are right that only the private sector can come up with the innovations that will lead to viable solutions. So, why not give it a chance?

Thank you for your time.

Well said, Stephen, and bravo! The EcoRight is surely growing, and you are an important part of it. ??????

Ready to take action? Head over to republicEn’s Action Center.