The mayor of Heber City, Utah, Kelleen Potter, was joined by Bill Rappleye, president and CEO of the Draper Area Chamber of Commerce and Dallin Koecher, the executive director of the Heber Valley Chamber of Commerce, to announce in a Deseret News op-ed the launch of Utahns for Carbon Dividends.

“As a red state, Utah can be a powerful voice on climate,” they write. “The time to join the national conversation is now: while the nature of national climate policy is still being debated, not when job-killing proposals like the Green New Deal are gaining momentum. Let’s embrace this bipartisan solution and solve our climate and air quality problems for good.” 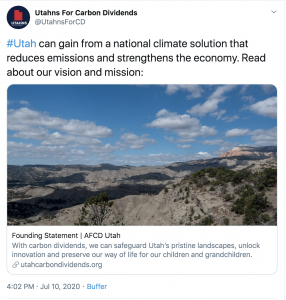