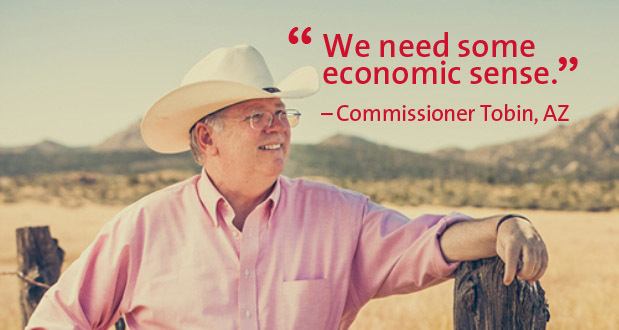 Former GOP lawmaker and utility regulator Andy Tobin is pushing for Arizona to harness the sun for a greater percentage of the state’s power needs. Tobin, a member of the Arizona Corporation Commission, released a plan to have 80 percent of Arizona’s electricity come from clean energy sources, including solar, wind, biomass, and nuclear power, by 2050. His plan also calls for 3 gigawatts, or 3,000 megawatts, of energy storage by 2030, which would be the largest energy-storage mandate in the country. Arizona already has the third largest installed solar capacity in the country, and according to Tobin, “most coal will be gone here by 2050.”

“This plan won’t be inexpensive, but it will save in the long run,” Tobin said. “This is a part of the Arizona mantra and history. Let’s be creative. Let’s be the first in mind. Let’s be the ones who plan well together.”

Tobin’s plan, which he refers to as the “Energy Modernization Plan,” must be approved by Arizona’s five elected utility commission members. “With the concerns we are facing our forest fires have been worse, our summers have been hotter, we are amidst a droughtwe need some economic sense.”