Happy last Friday in July! Today I’m thrilled to report that on my morning run, it was 30 degrees cooler than it was last Friday when I went for a run. Especially good because the EcoRight was hot hot hot this week. “I can tell you from what I know is that we are worlds apart from the Congress that I left at the beginning of this year,” said former Florida Rep. Carlos Curbelo, who lost his reelection bid last year. “During my four years I think we made a lot of progress on changing the culture to make it acceptable to discuss this challenge, to name it for what it is  but even then a lot of Republicans were not anxious to engage.”

This week’s must read: Beating the Green New Deal may require accepting the reality of climate change (Washington Examiner). GOP pollster Kristen Soltis Anderson writes, “sitting out the issue of climate change will no longer be a tenable position” for Republicans. “Huge generational divides on the issue make it a critical one for millennial and Generation Z voters who play a big part in the Democratic primary and who ought to be a persuasion target for savvy Republicans. And as polling from earlier this year shows, voters in the suburbs look identical to voters in the cities when it comes to the seriousness of climate change as an issue, with 68 percent saying it is a serious problem that needs action. The path back to a Republican House majority runs right through those very suburbs.”

Unlike a previous bill he co-sponsored, which returned revenue to Americans in the form of a dividend, the new version would use 70 percent of collected revenues to offset payroll taxes. “The idea is to have several of these carbon tax bills on the table for debate,” Rooney said in an interview with the Washington Examiner. “All are legitimate and each has its own constituency. I would think this one would be easier to sell for Republicans because it’s supportive of business and jobs rather than just giving it back to families.” The remaining revenue will be directed toward priorities such as R&D on energy efficiency, clean energy technology, and mitigation.

Rooney is one of a growing number of conservative lawmakers committed to enacting free market solutions to climate change. He’s looking to attach his name to a series of carbon tax-related bills.

Survey says…: Citizens for Responsible Energy Solutions (CRES) and the American Conservation Coalition (ACC) announced the results of a national survey finding that more than two-thirds of voters voters ages 18-38 want the party to do more to combat climate change. “Younger Americans are set to exercise their political muscle in 2020, and this survey clearly demonstrates that if the Republican Party wants to ensure both short and long term viability, it must embrace policies aimed at reducing emissions that affect climate change,” said Heather Reams, Executive Director of CRES Forum. “Millennial Republicans understand that a commonsense approach to balancing our nation’s economic, energy and environment needs is good policy and good politics. The survey results tell us that elected leaders will be rewarded by running for reelection on a record that supports clean energy development and deployment.”

Key takeaways from the survey are that Republican millennial voters believe the GOP needs to do more to address climate change and that ignoring climate change will be detrimental to the Republican Party. Fifty-seven percent of millennial GOP voters also believe change change is human-caused and three in four support federal action to accelerate the development of clean energy. Most believe it is very important or at least somewhat important to expand and use renewable energy resources.

The EcoRight Speaks: In our ongoing series, Ben Mutolo interviewed Katie Esterly a native Pennsylvanian, rising junior at American University, and intern with Students for Carbon Dividends. “People are surprised to hear me say as a Republican that I’m concerned about climate change,” she told Ben. “My conservative friends and family see environmentalism as a liberal agenda, and so they were very critical at first. There’s been frustration in convincing them that there are conservative solutions to climate change that don’t contradict the principles.” Read the entire interview here.

The Far Middle: Two of our spokespeople, Utah native Nick Huey and Alaskan Kiera O’Brien, testified before the Senate Special Committee on the Climate Crisis. The hearing, titled “The Right Thing To Do: Conservatives for Climate Action” also included pollster Frank Luntz, who gave feedback on how to talk about climate change based on his years of focus group experience. “As someone who polls and presents to both Republican and Democratic leaders, I know  we all know  that climate change has become a partisan issue. And for us to make that meaningful, measurable difference, we have to come up with meaningful, measurable, nonpartisan solutions,” Luntz said in testimony. “We also need to jettison much of the most extreme language in favor of a get-it-done approach.”

Yes, I’ve changed my opinion on #ClimateChange since authoring a skeptical memo 18 years ago.

Now, I want to use my powers for good and find ways to make it a nonpartisan issue. (Look how the @FloridaGOP has shifted after hearing the concerns of their coastal constituency.) pic.twitter.com/KFrKoT4qQR
 Frank Luntz (@FrankLuntz) July 25, 2019

Nick, who coined the expression The Far Middle, had the most heartfelt statement, one that even choked him up. “We may be from different parties, but we’re from the same planet,” he said. “The Far Left and Right each believe they have every right answer, while the other has none. Could there be a less rational mentality? To believe another group of people doesn’t have a single valid point to offer to the world? Radicalism is the abandonment of reason to embrace rage. To protect the tribe by hurting the other team. To prove my side right, by proving yours is wrong. It is this pride that has landed us in a cesspit of hate, unable to tackle climate change, the biggest threat facing our planet, because we’d rather tackle each other.” 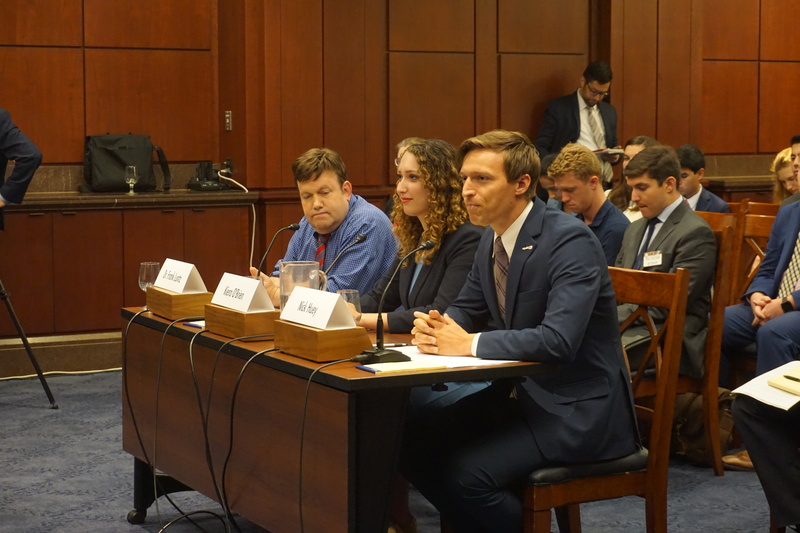 “The climate does not care who has scored the latest partisan shot. Neither does the economy, nor do the people whose lives have been and will be upended by climate uncertainty and instability,” Kiera said in her compelling testimony. “There are some issues so pivotal that they transcend partisan lines, state lines, and generations. Climate is one of them.”

You can tune into the whole hearing below:

I also recommend checking out Luntz’s words to use and words to lose: 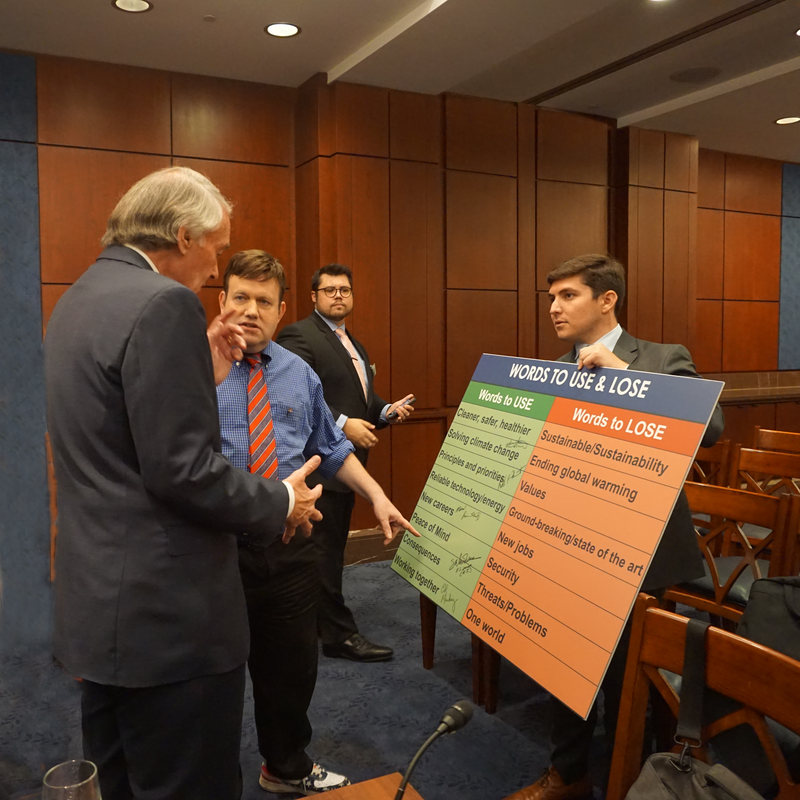 And that’s it for me. I move into the weekend strengthened by what I see, which is that every day the EcoRight grows in numbers and intensity. Have a good one!