Extra! Extra! Did you participate in our flash poll this week? We know this is going to shock you, but 98 percent of us would vote for a conservative candidate who supports climate policies over one who does not. 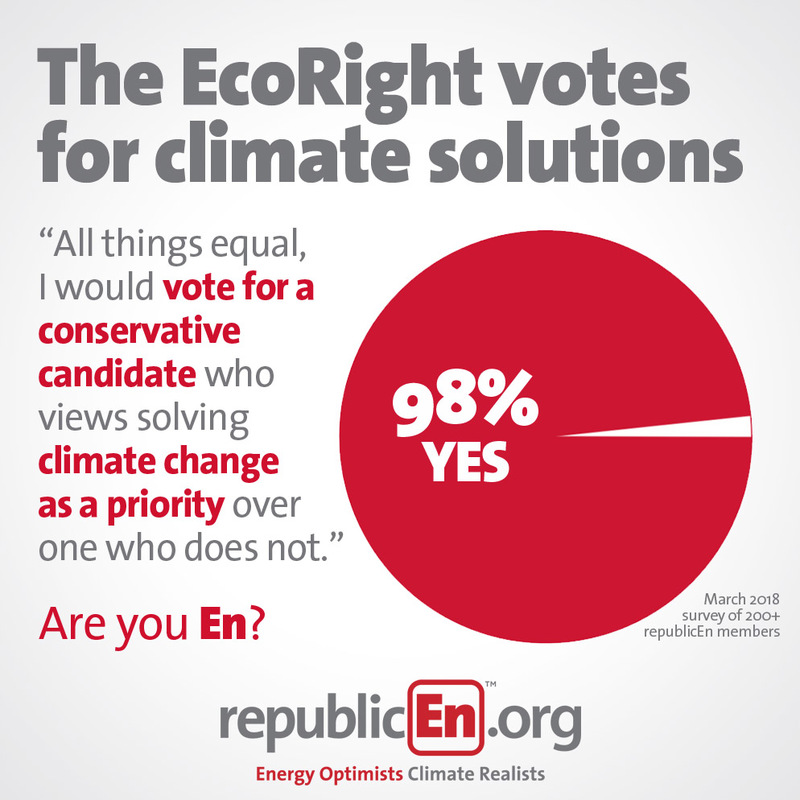 Who wore it better? Arnold Schwarzenegger, former governor of California, and Gov. John Kasich, currently manning the helm in Ohio, called for civility and problem-solving yesterday at an event launching New Way California, an organization aiming to reshape the GOP in the Golden State. “We can’t be afraid to talk about the environment,” said Schwarzenegger, who has been vocal on the need for climate action. In his remarks, he compared the California GOP to the Titanic. “I’m sick of politics,” Kasich added. “In an era of unbelievable change, you will begin to see parties crop up that will begin to serve their customers. You think our millennials care about what political party they’re in?” The group was founded by former assembly minority leader Chad Mayes, who lost his leadership position after negotiating with Democrats and Gov. Jerry Brown on climate legislation passed in that state last year. Through his new effort, he hopes to help “shed the stereotype of an intolerant Republican Party that serves only the rich and big businesses.” Schwarzenegger seemed to push his old friend Kasich to run in 2020. “Get back to Washington and kick some butt,” he said.

On the move: The State of Louisiana is moving 80 residents of Isle de Jean Charles, an island that has lost 98 percent of its land area since 1955 as sea levels rise due to climate change. Most residents are Native Americans, members of the Biloxi-Chitimacha-Choctaw Indians and the United Houma Nation. Home to what will be among the first U.S. “climate refugees,” Isle de Jean Charles is the first community to receive federal assistanceabout $48 millionfor their retreat from the impacts of climate change. Groundbreaking on the new location isn’t expected until 2019, leaving some residents worried about living through two more hurricane seasons. “That makes us very, very edgy,” according to Albert Naquin, chief of the Biloxi-Chitimacha-Choctaw Indians. “Unfortunately, coastal Louisiana is experiencing subsidence, relative sea level rise and coastal land loss faster than anywhere in the country. Fortunately, we’re also on the leading edge of resilience-building approaches to adaptation, drawing on innovative science and technology right here in Louisiana,” Pat Forbes, head of the state’s community development agency, said.

Pound foolish: The Federal Emergency Management Agency (FEMA), the federal entity responsible for dealing with the impacts left by natural disasters, stripped the words climate change from the 2018-2022 strategic plan. The document also fails to mention sea level rise, extreme weather or other global warming related impacts that could lead to the types of events FEMA typically responds to. This in spite of disaster-stricken 2017, which saw 16 weather and climate disaster events with losses of $1 billion or more in the U.S. according to NOAA’s National Centers for Environmental Information. Instead of hitting on the causes of risk, in a climate-jester move the FEMA plan notes: “Disaster costs are expected to continue to increase due to rising natural hazard risk, decaying critical infrastructure, and economic pressures that limit investments in risk resilience. As good stewards of taxpayer dollars, FEMA must ensure that our programs are fiscally sound. Additionally, we will consider new pathways to long-term disaster risk reduction, including increased investments in pre-disaster mitigation.”

Bay State plans: In other state moves, Massachusetts Gov. Charlie Baker isn’t leaving anything to climate chance. On Thursday, he unveiled a $1.4 billion plan to fortify the state against rising seas, inland flooding and extreme weather attributable to climate change. The proposal would authorize his administration to borrow money to rebuild aging seawalls and dams, while boosting funding for state environmental agencies and grant programs aimed at helping communities shore up their defenses. “We’ve been reminded of how critical our environmental assets like seawalls and dams are to our communities and how important these proposals will be for safeguarding municipalities and businesses from the impacts of climate change,” he said. “We’ve got 74 coastal communities and a ton of other communities for whom different issues associated with climate will be an issue. What we really want to do is make sure we build plans that work for every community and then follow through and execute on them.”

“All 351 communities need to have a vulnerability plan and a hazard mitigation plan.” The plan needs lawmakers’ approval.

Wishing you a wonderful weekend!