It’s the last Friday before Thanksgiving and some of us don’t know what desserts we’re making yet because we’ve been too busy searching the country far and wide for the best ecoright climate news. Check it out

This week’s must read: Conservative Solution to Climate Change and the Ecoright. We love this piece drafted by Miami University student Tyler Gillette. “The EcoRight wants clean air, water and other resources now and for future generations,” he writes.

Latergram on EnCourage Tour: This article appeared in the Concordian, the campus paper for Concordia College, where Bob took the EnCourage Tour on November 1st. Dr. Kenneth Foster, political science professor and chair of the President’s Sustainability Council, called the visit by republicEn.org important to “help conservative students to see that they can play a role in debating what we, as a society, can do to deal with climate change…It is essential to have trusted leaders on both sides of the political divide who are willing to bring people together to find common ground.” Students from Minnesota State University Moorhead and North Dakota State University were also in attendance.

Speaking of Encourage: Here’s a photo from Bob’s standing room only event this week at Texas A&M in College Station, TX. 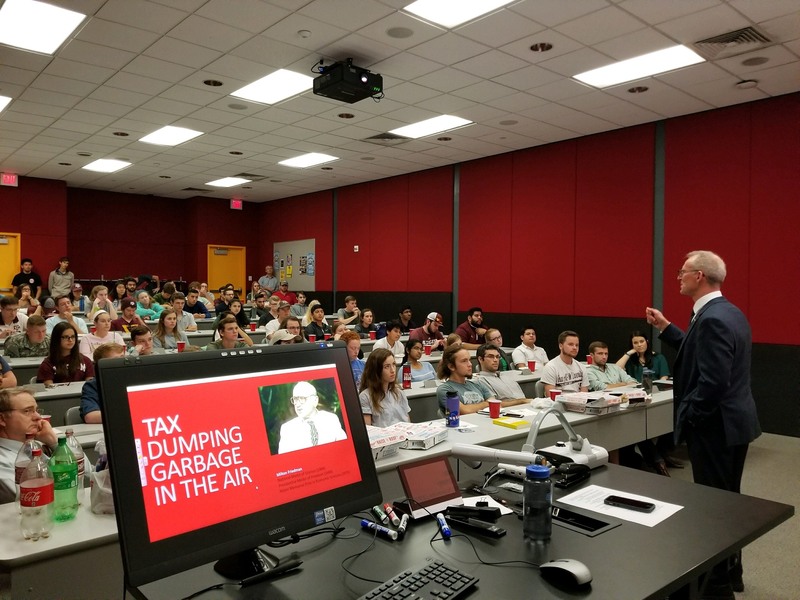 Young GOP activists ramp up: The American Conservative Council (ACC), a group of young GOP campus activists advocating pro-market clean-energy policies, just hit 30 states with college Republican chairs who have voiced support for a clean energy future. “Compared to how the Republican Party has been diminishing the issue for the last few years, we are encouraging them to make it a priority,” University of Washington sophomore Benjamin Backer, ACC’s president, told CNBC in an interview. “Clean energy is an issue that brings both sides together and creates a lot of jobs if it’s done the right way,” said Backer. “Republicans will continue to lose the youth vote if they don’t embrace the environment in a massive way.”

Curbelo accepts award: Florida’s Rep. Carlos Curbleo is a rising and ardent champion of climate solutions and was just rewarded with the JFK New Frontier Award. “Public officials have a responsibility to our constituents and future generations to present a united front to combat anti-climate policies and to have a productive, fact-based dialogue about market-oriented solutions, investments, and innovations that could mitigate the effects of climate change and make our nation more resilient. I am fortunate for the opportunity to do the work of bringing colleagues in Congress together to confront this great challenge and secure the future,” Curbelo said on Monday.

I told everyone at @HarvardIOP that I was accepting the #NewFrontier Award on behalf of the 62 House Republicans & Democrats who have acknowledged that #climatechange is a real challenge requiring bipartisan solutions pic.twitter.com/fhWmBc2sFe
 Rep. Carlos Curbelo (@RepCurbelo) November 17, 2017

Governator disappoints: While it isn’t jester worthy, we have to admit disappointment at former California GOP Gov. Arnold Schwarzenegger. In remarks delivered in Germany this week at the UN climate talks, he suggested activists stop talking about climate change. “You can have the best product in the world, but if you don’t know how to communicate it, you have nothing,” the long-time advocate for climate action said. “You talk about climate change, it sounds good, a lot of people know about it within this bubble, but the majority of people, ask them in a poll, they don’t know what the hell you’re talking about.”

Lady, I would answer your questions if you really wanted answers. Just try me. https://t.co/IxnFGAP3r6
 Katharine Hayhoe (@KHayhoe) November 14, 2017

Please send your ecoright news and newsmakers to us, as well as your favorite recipes for Thanksgiving desserts. And while you’re at it, side dishes.