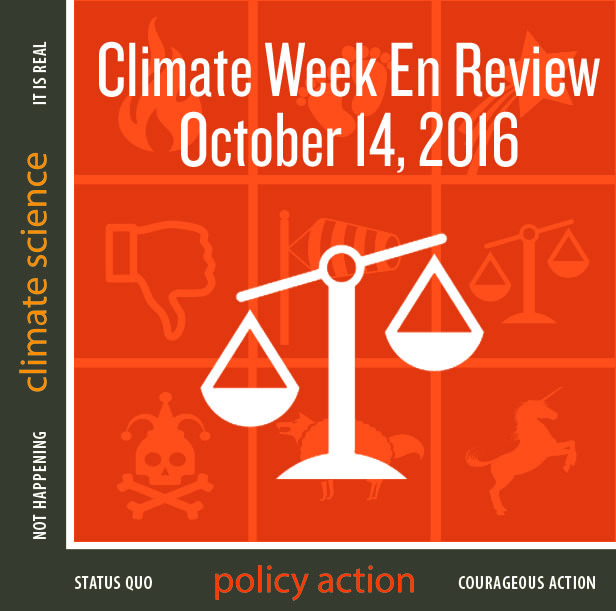 This week in ecoright climate change news, in what was appropriately an orange icon week, Greeley, Colorado Mayor Tom Norton, a Republican who thought lawmakers concerned about climate change in the early 1990s were “completely nuts,” has changed his tune. “We need to think as long term as we can imagine, and be very thoughtful about what we leave for our children,” he says.

Retired U.S. Army Colonel Lawrence Wilkerson, who served as chief of staff to Secretary of State Colin Powell under President George W. Bush, wrote in an op-ed that “progress is slow” on international efforts to address climate change if you calculate the accomplishments since the 1992 pact that created U.N. Framework on Climate Change. Wilkerson touched on the security risks climate posed, and how some day, opponents to action may finally see the light.

“When the seas rise, the storms come, the rains fall incessantly, the deserts extend, water turns salty or disappears, oceans are so acidic that fish stocks dwindle and are gone, and the U.S. armed forces move from one humanitarian disaster to another trying to help, and when 500 million people are on the move looking for water to drink and food to eat, when we are manning our borders with machine guns to keep them out, everyone will be seized of the truth. All will know that climate change is an issue of national security; indeed, of human security everywhere.”

Our weekly must read: Katharine Hayhoe, A Climate Explainer Who Stays Above the Storm (New York Times, Oct. 10, 2016)

Our weekly must listen: our own Alex Bozmoski appears on The Takeaway to talk about the importance of climate change to conservative millennials

Have a great week, friends!