This week’s must watch: Global Weirding with Katharine Hayhoe

This week’s much read: Bob Inglis Takes a Stand on Climate Change 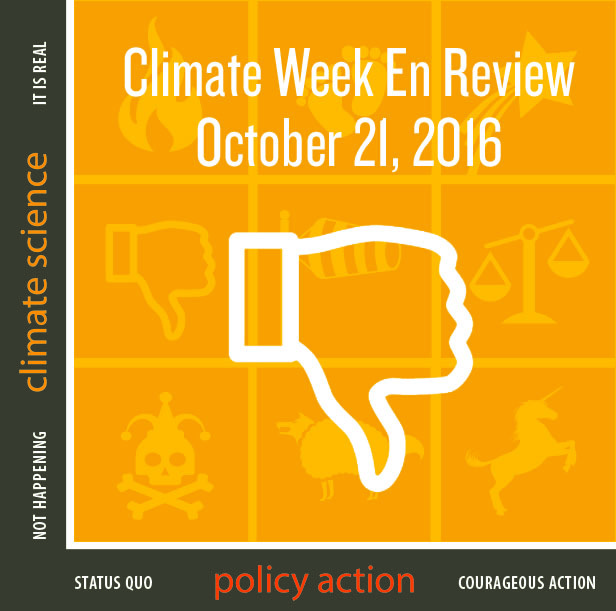 This week in climate change news, an economic advisor to Republican presidential nominee Donald Trump said reforming U.S. energy policy is a goal, but that a carbon tax is off the table. “That is not a market-based way to have more energy benefits for the nation from our huge energy resources,” David Malpass told reporters in response to a question on whether a Trump administration could support putting a price on carbon.

In other news, two ghosts of GOP primary past spoke about climate change. Former Arkansas Gov. Mike Huckabee asserted in a long Facebook status update that “most Americans just aren’t that concerned” about climate. Click here for a more detailed look at his climate post. Likewise, Florida Sen. Marco Rubio said implementation of carbon emissions policies is “not the approach I want to take.”

“As a policy maker, you have to show me whether the laws you want me to pass will actually impact the issue that you are raising. I have people that come to me and say: we want you to pass these laws on carbon emissions, and I ask them, well how many inches of sea rise will it prevent?” Rubio elaborated.

Meanwhile, New Hampshire Sen. Kelly Ayotte said she “would like to be in a position to drive more bipartisan discussion around how we protect our environment.” She faces re-election in November.

Last but not least ICYMI the HFC amendment to the Montreal Protocol is a big deal. If you need a quick primer on what it means, click here.

Bundle up and have a great weekend!