Another week is in the ecoright books. Here is the news we’ve been following:

This week’s must watch: Was this latest hurricane caused by global warming or not? ” So where’s the truth? It turns out it’s right in the middle.”

Another mayor getting it done: Check out this profile of Georgetown, Texas Mayor Dale Ross, a conservative Republican who led his town to be the first (and only) in Texas to run completely on renewable energy. On climate change, he has this to say: “What reasonable person can’t weigh the evidence and come to the conclusion that climate change is real and it’s happening. When you say,`No, it’s not.’ Really? Well what are you basing that on? You think Irma and Harvey were just coincidences? Really?” We say: don’t mess with Texas!

Iowa evangelist preaches climate: In similar news, we are officially drafting Iowan Lindsay Mouw into the ecoright club. This young conservative details her conversion on climate change (she even changed her major from medicine to environmental science) and how her faith guides her actions. “No one even talked about climate change in church, and some had barely heard of it. We know God loves his creation and the poor,” she said. “So start small. Ride your bike. Turn off the lights. I tell them to think of it as loving your brothers and sisters around the world. Do this as part of your faith.”

Climate’s pricey tab: The Government Accountability Office (GAO) issued a report citing the billion of dollars the U.S. already spends due to climate change. The federal government has spent $350 billion in the last decade on disaster assistance programs, not including the three devastating hurricanes to hit the mainland in 2017, costs of which also are estimated in the $300 billion range. According to the study, the federal government has “not undertaken strategic government-wide planning to manage climate risks by using information on the potential economic effects of climate change to identify significant risks and craft appropriate federal responses.” Maine’s Sen. Susan Collins, a co-requestor of the report, called the economic impact figures “astonishing” and pointed out that the Maine economy “is inextricably linked to the environment. We are experiencing a real change in the sea life, which has serious implications for the livelihoods of many people across our state, including those who work in our iconic lobster industry.”

To illustrate, here’s an image from the National Oceanic and Atmospheric Administration of the U.S.’s billion-dollar weather and climate disasters: 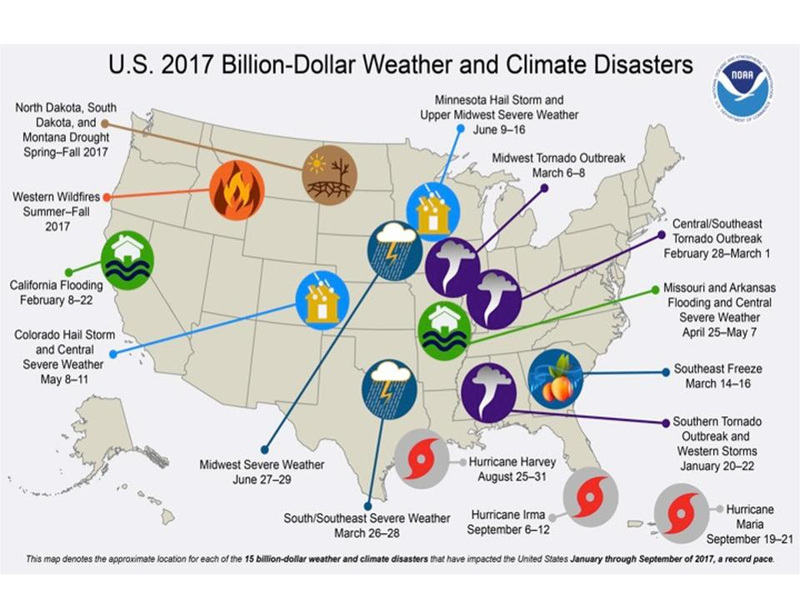 “Climate change is real”: Alaska’s Sen. Lisa Murkowski, who chairs the Senate Energy and Natural Resources Committee, addressed the Alaskan Federation of Natives, where she said “confronting climate change and adapting to it will take leadership, it will take partnership and attention to social justice if we are to find the strength to tackle the issue together.” She pointed to the crisis posed by a changing climate as an opportunity for new energy solutions being tested in small Alaska communities with scalable potential. “The eyes of the world, my friends, are looking to us. They’re looking to Alaska for some of these solutions,” she said. “Climate change is real!”

Nicaragua says oui: Nicaragua officially joined the Paris Climate Agreement, leaving the U.S. and Syria as the only two nations on the sidelines.

Fun fact: According to the Bureau of Labor Statistics, solar installers and wind turbine techs are one-two on the top ten list of fastest growing jobs in America.

Climate jester: It wouldn’t be Week En Review if we didn’t highlight the week’s eyerolling moment. Kelly Craft, the new U.S. ambassador to Canada says she believes “both sides of the science” on climate change.

That’s it on this end! Remember on Halloween, not much is scarier than lack of climate leadership!