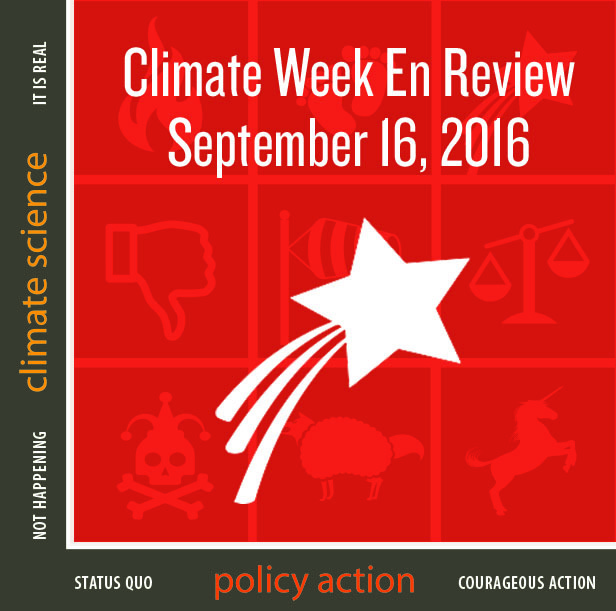 This was a red star week in ecoright climate change news.

To start the week, we applauded Politico Magazine for placing ecoright climate leaders Rep. Bob Inglis (our executive director) and Dr. Katharine Hayhoe on their list of 50 thinkers and doers.

“We’re making progress,” Inglis said. “Conservatives are going to come around on climate. We’re going to realize that we’re all in this together, and the world is going to celebrate American leadership. This is our generation’s moon shot.”

In Congress, the House Climate Solutions Caucus added two more Republican lawmakers, Rep. Lee Zeldin (R-NY) and Rep. Mark Amodei (R-NV), bringing the total bipartisan membership up to 20. Related, South Carolina Rep. Mark Sanford joined as a co-sponsor of the Gibson Resolution, which expresses support for House action on climate change. He is the 14th Republican to support the measure.

On the other side of the hill, former New Hampshire Senator Judd Gregg and conservative clean energy advocate Jay Faison testified in support of nuclear power at a hearing held by the Senate Appropriations Subcommittee on Energy and Water.

GOP presidential nominee Donald Trump, responding to a questionnaire issued by Scientific American and other science-based organizations, wrote: “There is still much that needs to be investigated in the field of ‘climate change.'” However, he suggested that financial resources should “perhaps” be directed to other issues such as providing clean water, fighting malaria and shifting off fossil fuels.

Also from the campaign trail, Trump expanded his team of advisors, adding Mike Catanzaro, Jeff Wood, and former CIA director R. James Woolsey, who has warned of the national security implications of climate change and advocated for the U.S. to shift toward more clean energy use.

Our newsy week ends there! See you next week.