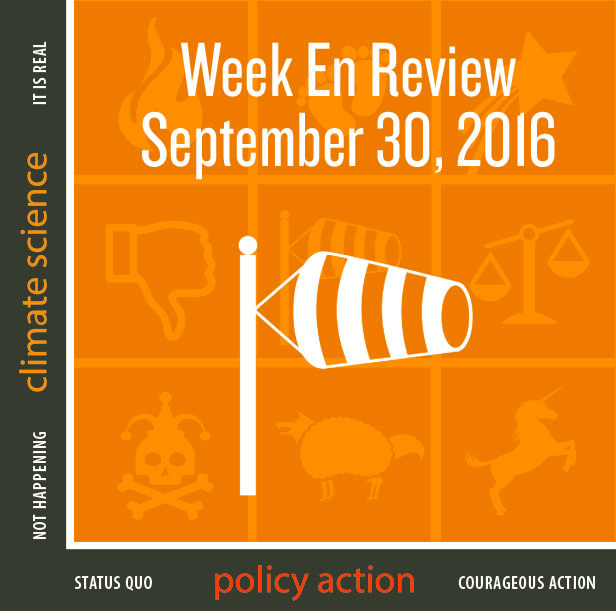 The good news first. In the U.S. House of Representative, Rep. Carlos Curbelo (R-FL), Rep. Bob Dold (R-IL), and Rep. Chris Gibson (R-NY) joined four Democratic colleagues to introduce the Climate Solutions Commission Act of 2016. The bill would establish a bipartisan commission comprised of nonprofit and private sector experts who would report to the President and the Congress on economically viable climate policies to achieve science-based emissions reduction targets. The U.S. Government Accountability Office would concurrently report on financial tools, policies and institutions that can contribute.

Tennessee Rep. Marsha Blackburn, Vice Chairman to the House Energy and Commerce Committee and surrogate to Donald Trump, took to the airwaves to discuss the GOP presidential candidate’s position on climate change. When asked if she thinks climate change is a hoax, Blackburn replied, “I do not believe in climate change. I think the Earth is in a cooling trend. It is not in a warming trend… It has cooled for about the past 10 years.”

The first presidential debate did not include a direct line of questioning on climate change, despite pleas from several different outlets for NBC News moderator Lester Holt to bring it up in the context of the economy, but the matter came up briefly in an exchange between former Secretary of State Hillary Clinton and Donald Trump.

“Donald thinks that climate change is a hoax perpetrated by the Chinese,” Clinton said, referring to a Trump tweet from 2012 that has since been deleted from his account. “I did not,” Trump interrupted. “I did not say that. I do not say that.” The next day, Trump’s VP running mate Gov. Mike Pence explained, “What Donald Trump said was a hoax is that bureaucrats in Washington, D.C., can control the climate of the Earth.” He also distanced himself from his running mate on the issue of climate change. “There’s no question that the activities that take place in this country and in countries around the world have some impact on the environment and some impact on climate.” By contrast, in 2014, Pence said he didn’t consider climate change “a resolved issue in science.”

Meanwhile, Trump’s campaign manager Kellyanne Conway explained her boss’s comment from the debate. “He believes that global warming is naturally occurring,” she said. She confirmed he does not think climate change is caused by human activity. In related campaign news, Trump tapped climate skeptic Myron Ebell, director of the Center for Energy and Environment at the Competitive Enterprise Institute to spearhead the transition team for the Environmental Protection Agency. Ebell has said any warming of the planet is within the range of natural variability and “whether it’s caused by human beings or not, it’s nothing to worry about.”

A coalition of environmental and social justice groups in Washington state oppose I-732, the $25/metric ton carbon tax ballot initiative supported by some of the state’s GOP lawmakers. The member organizations of the Alliance for Jobs and Clean Energy claim the measure doesn’t do enough to protect low income households. However, a counterproposal supported by the Alliance would designate 75 percent of carbon tax revenues to clean energy and 25 percent to disadvantaged communities, whereas about 75 percent of revenues under I-732 would lower Washington’s sales tax by one percent and provide a match of up to $1500 of the federal Earned Income Tax Credit for low-income working families. The measure would also eliminate the Business and Occupation tax for manufacturers.

Libertarian candidate and former New Mexico Gov. Gary Johnson, appearing on the Sunday program This Week, explained his 2011 comment that “in billions of years, the sun is going to actually grow and encompass the Earth…so global warming is in our future.”

“Can’t we have a little humor once in a while?” Johnson responded to host George Stephanopoulos when asked about the previous statement. “We should be prudent with the environment,” he said.

That’s a wrap for the week’s activities. Happy weekend!