2016, where did you go? (Or as some of us would say, good riddance.) Whether you loved it or hated it, the year went by fast and was packed with drama. Let us recap each month’s climate news highlight for you

In January, the Republican primary contest was still in full swing with 17 candidates vying for the nomination. Back in those long ago days, ClimateEye only covered the Republican presidential primary, and while there were many alerts to choose from, surely the highlight of the month was Texas Sen. Ted Cruz blasting climate change science as “the perfect pseudo-scientific theory.” It was not the first time he attacked climate science, nor do we expect it to be the last.

February played host to a rapid winnowing of the Republican field, though Ohio Gov. John Kasich doggedly remained in the race and grew increasingly more vocal about his support for brokering a climate change solution. “I know that human beings affect the climate. I know it’s an apostasy in the Republican Party to say thatI guess that’s what I’ve always been,” Kasich added. “[Someone] able to challenge some of the status quo.”

In like a lion, out like a hungry lion, March brought America another debate, more candidate dropouts, and frontrunner Donald Trump‘s interview with the Washington Post, at which he said in response to a question about climate change: “I think there’s a change in weather. I am not a great believer in man-made climate change. I’m not a great believer. There is certainly a change in weather that goes  if you look, they had global cooling in the 1920s and now they have global warming, although now they don’t know if they have global warming. They call it all sorts of different things; now they’re using ‘extreme weather’ I guess more than any other phrase. I am not  I know it hurts me with this room, and I know it’s probably a killer with this room  but I am not a believer. Perhaps there’s a minor effect, but I’m not a big believer in man-made climate change.”

The team at republicEn.org started off April with a bang by breaking important campaign news in this gem of a post, perhaps our most commented on and retweeted alert to date. We totally got you on that one! (And we remain grateful that Bob has a robust sense of humor.)

By May, Cruz and Kasich both dropped out of the race, and ClimateEye began to plan its expansion into covering all eco-right climate news, not just limiting our coverage to the presidential race. We instituted a new key for scoring the news and to date, have assigned every icon to an alert except the elusive unicorn. (P.S. If you know of a climate denier proposing courageous climate action, do let us know.) 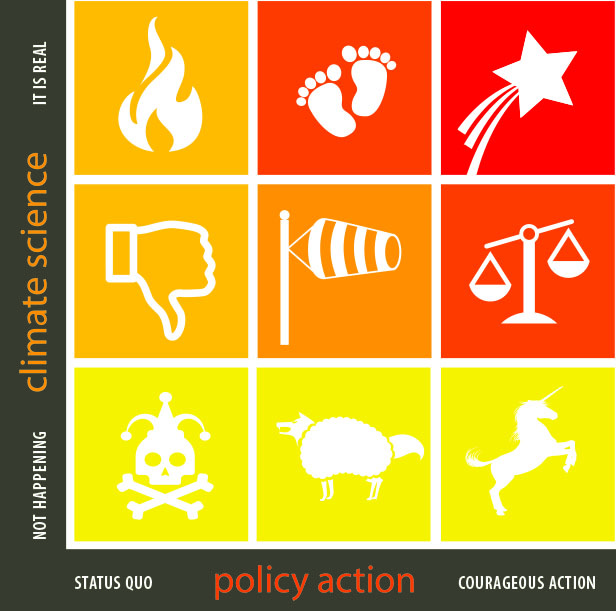 In June, San Diego’s Republican Mayor Kevin Faulconer won a second term in office, news that earned our first red star for his commitment to climate solutions. His $127 million Climate Action Plan for the city is “just the downpayment,” Faulconer said, “to help us create the foundation we need as we build a better and cleaner future for all of San Diego.”

In July we discovered kindred spirit Mayor Jim Brainard, longtime mayor of Carmel, Indiana, who believes “when describing the tenets of being Republican, and of conservatism, a lot of it is about being willing to take personal responsibility for your actions and your choices.” For example, Mayor Brainard, who bikes to work, has overseen the building of more traffic easing measures such as roundabouts as a solution to congestion problems.

We are obviously enamored with mayors as in August, republicEn.org awarded Coral Gables, Florida Mayor Jim Cason our ENvisionary Award. “I didn’t realize how impactful [sea level rise] would be on the city that I’m now the leader of.” he said. “History is not going to look kindly on us as elected leaders for not taking a leadership position.” Three cheers for the mayors!

September meant back to school for kids, I mean, back to work for Congress. The House Climate Solutions Caucus expanded, a new climate change bill was introduced by eco-right partners, and our own Bob Inglis was named in the POLITICO 50 for his conservative outreach and leadership on climate change.

October produced perhaps our favorite climate-related video clip of the year, in which former California Gov. Arnold Schwarzenegger had much to say about people who “don’t believe” human activity causes climate change. It’s better to watch the clip than for me to attempt to summarize it. (My written word does not have an accent.)

Absolutely nothing significant happened in November. Oh, right… Obviously, there were winners (Rep. Carlos Curbelo, solar energy in Florida). There were losers (Sen. Kelly Ayotte, a carbon tax in Washington State). Post Election Day, through the rest of the month and moving into December have come questions of “what now” as President-elect Trump selects his cabinet and presents goals for his first 100 days in office, potentially including pulling the U.S. out of the Paris climate agreement and repealing the Clean Power Plan without offering an alternative for ensuring emissions reductions. But don’t despair; we see daily evidence that new eco-right leadership is emerging, and we continue to hear calls from the eco-right for climate action and bipartisanship.

What will 2017 hold? We cannot predict, except to say it won’t be easy, it will require our steadfast commitment to action, and we don’t expect to see any unicorns.