On the eve of the day of giving thanks, the republicEn.org team offers to the ecoright community a snapshot of those people for whom we hold gratitude.

Alex: Poor Alexappreciative of everyone in the ecoright community from business leaders to academia to millennials to lawmakersdebated on whom to choose. Finally, for being a “voice of reason” he opted for Gary Cohn, Director of the National Economic Councilnicknamed Carbon Tax Cohn by former Trump adviser Steve Bannon. Cohn personally supports using the carbon tax to offset tax reform, but recently admitted the mechanism is “not in our mix” of White House priorities for the tax reform effort in Congress. In the past, Cohn called human impact on climate change a reality. “Human activities are largely responsible for increasing concentrations of greenhouse gases in the earth’s atmosphere.” That’s a good influence to have in the Administration.

Bob: Fresh off the ten-city, ten-week EnCourage Tour, Bob said he’s particularly thankful for young leaders like Nick Huey from Brigham Young University, whom he met at a stop in Utah. “Nick is aware of the problem of climate change but also excited about the opportunity to light up the world with more energy, more mobility and more freedom. The great thing is that there are lots of Nicks out there. I’m hoping that they talk it up with their older relations at Thanksgiving dinner!” Nick (pictured below) founded the Climate Campaign, a nonprofit group advocating for climate awareness.

Just look at that enthusiasm! And he’s rearing the next next generation of the ecoright. 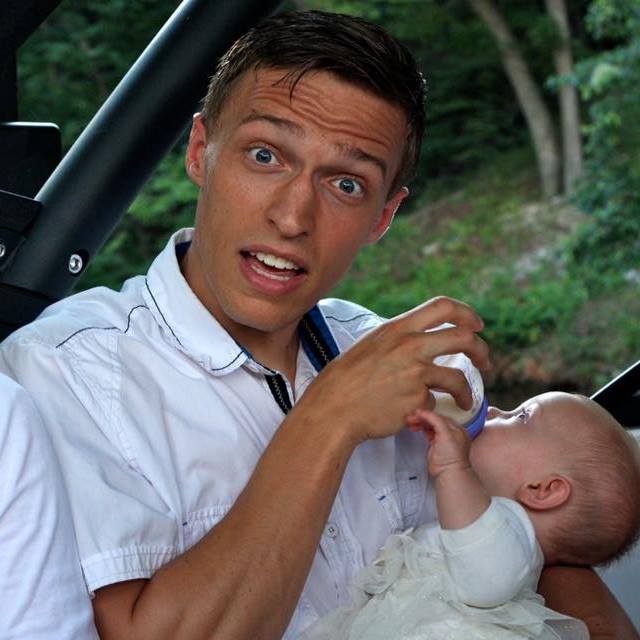 Chelsea: “From decades of scientific study to the Global Weirding series to the most entertaining (and substantive) climate-related Twitter feed, I am grateful to climate scientist Katharine Hayhoe. She’s preaching the science to skeptical demographics and is great at explaining why we need to care about climate.” Plus, she doesn’t sweat the Twitter trolls. Watch one of her short videos for talking points if you’ll be sharing Thanksgiving with a climate denier. And take her advice, if Aunt and Uncle Denier say they don’t “believe” in climate change, respond back: “gravity doesn’t care whether you believe in it or not, but if you step off a cliff, you’re going to go down.”

Kevin: “I am grateful for Sen. Lindsey Graham from South Carolina for his courage to come out publicly for a carbon tax,” Kevin said while taking a break from making amazing updates to our website. Delivering remarks at a climate change conference in September, Graham said: “I’m a Republican. I believe that the greenhouse effect is real, that CO2 emissions generated by man is creating our greenhouse gas effect that traps heat, and the planet is warming. A price on carbonthat’s the way to go in my view.” We hope Graham can bring some friends along for the ride!

Price: A longtime aid to our fearless leader, Price picked the tireless Bob Inglis as the person on the ecoright he’s most grateful for this week and always. “”When this is all over,” Bob told a recent audience, “we’re going to find out that what looked like powerful opposition to climate action is going to be pitiful and few, and we’re going to be amazed that a handful of people held the world back.” May he continue to thrive and shepherd the converted!

Rebecca: “For a career’s worth of public service, I’m grateful for Rep. Ileana Ros-Lehtinen. She’ll be missed.” The Florida lawmakerretiring at the end of the Congressional sessionis a recent climate convert, but passionate in her insistence that the GOP lead the way in finding a solution. “Our party needs to forget about who caused climate change and all of that nonsense and just say, ‘Look, this is real. Sea-level rise is science. It’s not somebody’s opinion, it’s guided by science,” Ros-Lehtinen said recently.

Who are you most grateful for this holiday season? Let us know!