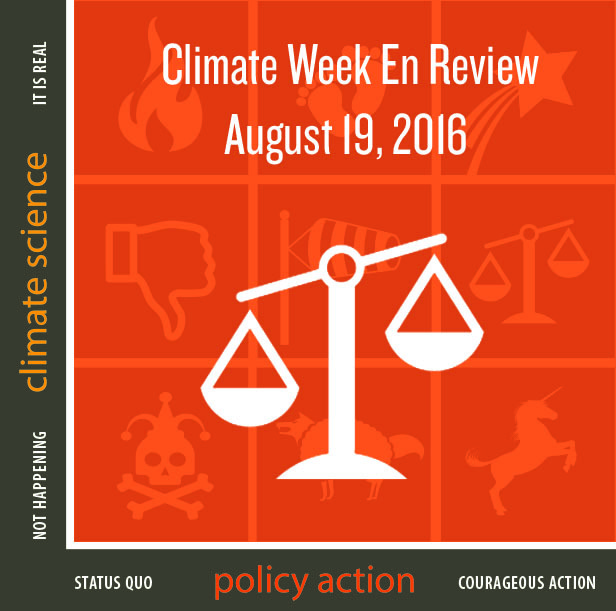 There was balance in the force this week in climate change.

We are proud that our very own Bob Inglis appeared on C-SPAN to talk about our favorite issue. Check out his interview in its entirety here.

Carbon Washington, a campaign in Washington to support I-732, a statewide ballot initiative that would assess a revenue-neutral fee on carbon emissions, faces environmental opposition but has garnered some Republican support. State Sen. Mark Miloscia announced he would back the initiative because it uses “proven market measures” to reduce carbon emissions. Likewise, former Republican Senate Majority Leader Bill Finkbeiner lent his support to the effort, as has GOP Sen. Steve Litzow.

“For our children and future generations, we need to start the long transition away from fossil fuels and the pollution they create,” said Litzow in a press release. “Pollution damages our air quality, waterways, health and climate. I-732 creates a market-driven, non-regulatory incentive to reduce pollution without increasing our total tax burden or the size of government.”

GOP nominee Donald Trump told the Miami Herald that “there could be some impact” from climate change, but that he doesn’t believe it’s a “devastating impact.” Trump reiterated he’s “not a big believer in manmade climate change,” indicating that the changes in sea level rise, which pose a threat to many of Florida’s coastal communities, are the result of “a change of weather patterns.” Trump emphasized he supports “crystal clean water and air” and that “we have a lot to do with that, keeping our water clean, keeping our air clean,” but suggested American businesses cannot compete domestically because of environmental regulations. He went on to say that if local communities wanted to take adaptation measures, “they should do it.”

Inspired by a visit to Portland, OR where he saw firsthand a number of rooftop solar installations, South Carolina state Sen. Greg Gregory has led conservatives in his state toward acceptance and adoption of more solar power. He drafted and ushered through the legislative process a solar bill and the ultimate compromise adopted by the state.

“It seemed ridiculous to me that a state that is cloudy eight months a year had so much solar energy, while South Carolina had so little,” he observed. South Carolina’s solar law, passed in 2014, moved the state from near the bottom of the list in a national ranking to 34th for installed solar capacity. Gregory and his allies hope to see the state’s progress jump to 20th in the nation as they strive to meet a goal of expanding from 7 to 765 megawatts of installed solar capacity over the next five years. Gregory will reintroduce in the next session a bill to prevent taxation of residential and commercial solar.

“Renewable energy is something conservatives should be in favor of,” he said.

Last but not least, we profiled Vernon Lindo, one of our latest recruits, who is about to enter his freshman year of college and already has a published op-ed to his name. Get inspired by this young ecoright crusader and read his piece on the carbon tax.

We are serious when we admit we can’t find all the interesting ecoright news to report, so please send tips and tidbits our way!