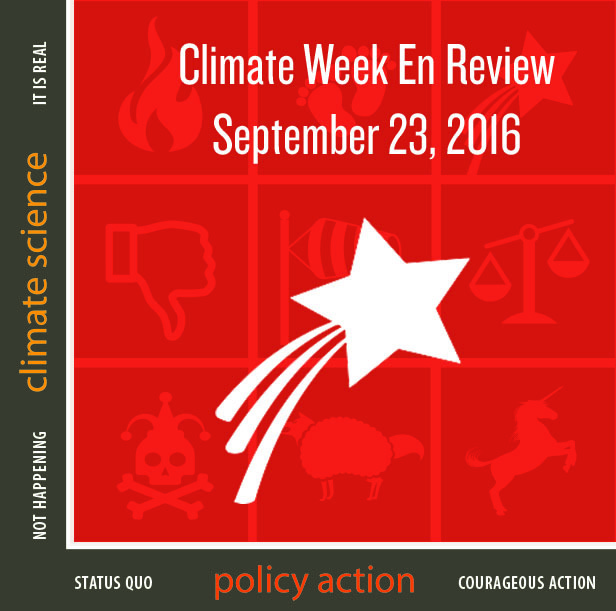 This red star week in climate change, conservatives from 30 states, more than half of them millennials, gathered in Washington, D.C. for the second annual Conservative Clean Energy Summit hosted by the Christian Coalition and Young Conservatives for Energy Reform. The event featured panelists reviewing recent polling data and drew a slate of Congressional speakers.

“It’s okay to admit climate change is real, and we can do something about it in a business friendly way,” Sen. Lindsey Graham (R-SC) told the audience. “Conservative millennials are the key to making this happen.”

“If conservation isn’t conservative, words have no meaning at all,” Rep. Chris Gibson (R-NY-19) said. “You can’t just be against stuff. You have to be for things,” he advised.

In a poll commissioned by Young Conservatives for Energy Reform, taken of 940 self-identified conservatives between the ages of 18 and 35, 74 percent said we should address climate change, but only in a way that doesn’t hurt our economy. Sixty-seven percent said the longer we wait to address climate change, the heavier the tax burden on future generations, and 58 percent expressed support for a revenue-neutral carbon tax.

Earlier this week, in written response to a questionnaire administered by Science Debate, Libertarian presidential nominee and former New Mexico Governor Gary Johnson acknowledged that greenhouse gas emissions contribute to climate change. “Unfortunately for policymakers, the very activities that appear to contribute to climate change also contribute to mankind’s health and prosperity, so we view with a skeptical eye any attempts to curtail economic activity,” he wrote.

Last Friday, Massachusetts Gov. Charlie Baker signed an executive order directing state agencies to develop and implement a climate adaptation plan for the state. “Combatting and preparing for the impacts of climate change will require a holistic approach across state and local government and in collaboration with stakeholders from all corners of the Commonwealth,” Baker said.

Retiring Texas Rep. Jim Keffer (R-Eastland), who has served in the state legislature for 20 years and is the current chair of the energy and natural resources committee, talked in an interview with the Texas Observer about environmental stewardship and climate change. “We have to be good stewards of what we have,” Keffer said. “The environment doesn’t run us, but it can certainly devastate us if we don’t [use natural resources] well. I guess I fall in the camp that it’s there for our use, but we better be dang sure and very judicious and very thoughtful in how we use it.” He has taken a balanced approach on energy issues in his state, and said he “believe[s] in climate change.”

Don’t forget: you can help spread the word that we need the “right” climate question posted at the debate on Monday. Share with your networks!